A former US Navy pilot has sat down for an interview with Joe Rogan and explained his experience with a UFO while being airborne.

The former Navy fighter pilot, Lt. Ryan Graves, explains that his squadron began seeing Unidentified Aerial Phenomena (UAP) or UFOs, to the best of his knowledge, in late 2013 or early 2014. Graves says that he began witnessing these objects when he and his squadron would fly out to the training area like any other day and that the upgraded radar system identified several different contacts, which immediately became an issue.

Graves explains that some of the objects coming up on his multiple radar systems were perfectly stationary in 130/140 mph wind and that these objects showed no signs of energy emittance in any direction. The former Navy fighter pilot said that the first time the radar detected these objects, he believed the radar was malfunctioning and showing objects that weren't really there. This was his belief until a fighter pilot managed to get close enough to one of the objects to confirm its existence and rule out any radar malfunction. 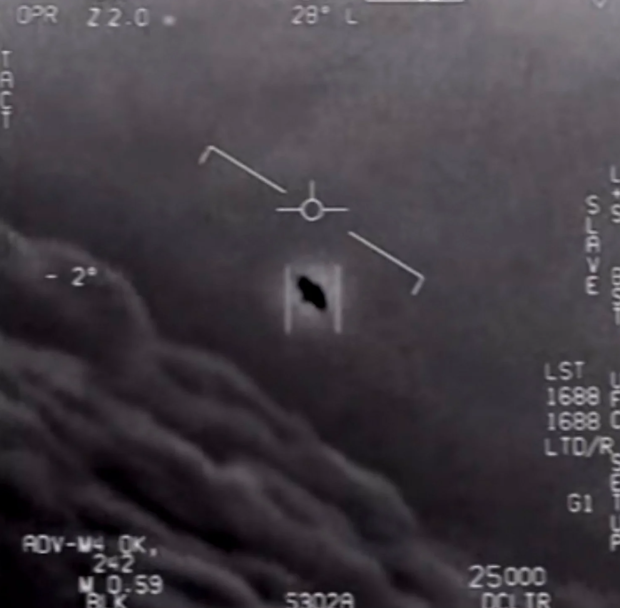 Interestingly, Graves goes on to explain that some of the objects would fly in a "race track" pattern, which essentially means that the object would fly in a straight line for some distance, perform a U-turn, fly back the same way, and then U-turn again. The former US Navy pilot explains that this flight path is used by fighter pilots to monitor an area, as it requires more energy to turn in the air than to maintain a straight line.

Graves explains that two of his squadron visually saw one of the objects when they were entering the training area as it passed directly between the two aircraft that were flying in formation. The lead pilot that saw the object described it as "a black or dark gray cube. And that cube was inside of a clear or translucent sphere."

Graves said that these objects were both floating and flying around the sky.