A former Navy fighter pilot who has encountered multiple UFOs or now refferred to as Unidentified Flying Phenomena (UAP) has sat down to explain some of the most famous UFO videos from the perspective of a pilot.

Lt. Ryan Graves is a former Navy fighter pilot that has worked on advanced researchers and development programs for DARPA, the Office of Naval Research, and Airforce Research Labs - specializing in advanced topics such as AI-assisted air-to-air combat, manned-unmanned teaming technology and more.

Notably, Graves and his squadron have encountered UFOs on multiple occasions, with one of instances being the famous declassified and released "Gimbal" UFO video that was captured by a Navy fighter jet from the nuclear aircraft carrier USS Theodore Roosevelt, off the eastern seaboard, near the Florida coast.

Graves explains on the Lex Fridman Podcast that he was airborne for this particular encounter and that the fighter pilot that recorded the footage was a close training partner of his, and that on the day of the encounter the pilots were on an air-to-air training mission - a stimulation of a fight between two squadrons of US pilots.

Graves states that the team of pilots that recorded the Gimbal footage were traveling back to the boat to land when they noticed on their instruments that an object showed up on the radar. The pilots then flew over to capture the footage that was later released and confirmed to be a UFO by the US government.

Graves explains that the object looks like "if someone put two plates together, and then there seems to be almost like a small funnel of IR energy that's at the top and the bottom of those plates. There's a stick going in between two plates, but not that pronounced. So, there's an energy field that kind of went to a funnel on the top and the bottom, at least that was what the fleer [footage] was showing."

The former Navy Pilot goes on to say that typically pilots are able to see the skin of the aircraft, the shape, flames coming out of the exhaust, or other types of exhaust. In the instance of the Gimbal there was no exhaust from the object, or "outgassing of propellent in any manner. It was just an object that had nothing emitting from it that was stationary in the sky, we'll not stationary, it was moving a long a path [and] it wasn't falling out of the sky," says Graves.

The lack of logical explanation for the objects movements or origin were relayed up to the command chain after the pilots returned, with the commanding officer immediately informing the Pentagon after watching the footage. 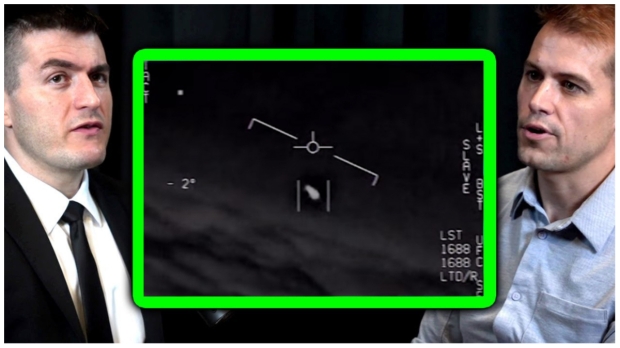