In a new video, Moore's Law is Dead said his sources explained that NVIDIA's new GeForce RTX 4080 12GB was "just starting production at most" when the company relaunched it, with AIBs being "barely OK" said the source. The second source said that "almost none" made it to the US "besides maybe samples". 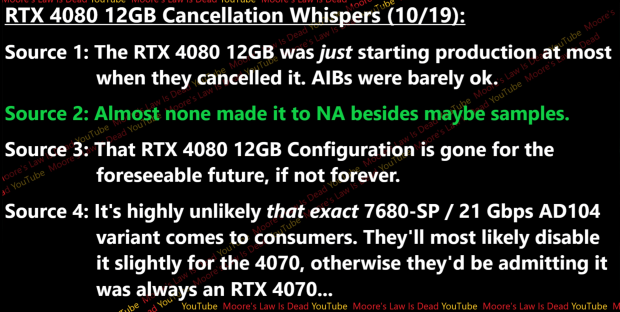 Another source explained that the GeForce RTX 4080 12GB configuration is "gone for the foreseeable future, if not forever" while the final source said that it's "highly unlikely" that the exact 7680 CUDA core version with 21Gbps GDDR6X and the AD104 GPU variant comes to gamers. The last source said that NVIDIA will "likely disable it slightly for the 4070, otherwise they'd be admitting it was always an RTX 4070".

MLID says that he thinks NVIDIA didn't just cancel the GeForce RTX 4080 12GB in simple move, and that it wasn't just from the backlash and weird naming... and that the company still has a boat load (well, warehouses full) of Ampere-based GeForce RTX 30 series GPU stock that it STILL needs to get rid of.

They knew that they'd get horrible reviews on the GeForce RTX 4080 12GB, with the benchmarks released by NVIDIA themselves showing a pretty huge gap in performance between the RTX 4080 16GB and the now-nixed RTX 4080 12GB, so cancelling the card altogether is the easier solution than being ripped a new one.

Another source told MLID that what they're seeing is Ampere is still hopelessly overflowing warehouses and that in response to that, NVIDIA is intending to let RTX 4090 stock dry up occasionally like it is now, "in order to push people towards buying Ampere.

The same source continued, saying that more Lovelace stock will keep coming, but they're going to keep throttling 4090 and 4080 supply as long as they need to push people towards buying GA102 Ampere cards. They are hoping to have the situation worked out by the end of Q1... that's when I would hope for the 4070 to be available at the soonest (besides maybe earlier paper launches).