New Vegas-era dialog skill checks are back, and Starfield will have a unique persuasion system befit of a "classic" Bethesda game. 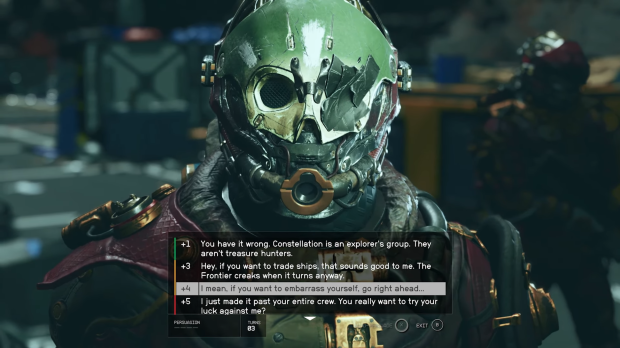 Starfield is shaping up for its impending 2023 launch, and no epic Bethesda RPG would be complete without an innovative dialog system. We've already reported that Starfield wouldn't recreate one of Fallout 4's biggest mistakes, but now Bethesda's Todd Howard discusses more info on the game's dialog mechanics.

"We've a lot of different dialog systems, we've gone back to a kind of classic Bethesda style dialog system. You're looking at the character and how they emote and there's a series of choices there," Howard said in a new Starfield video.

"The scope of the game, the amount of content we're making is a bit more than we've done before in terms of quests and things like that. The depth in some of the stuff with the dialog...we just passed 250,000 lines. So that's a lot of dialog. But we've gone through it and the impact is really there. And that includes my favorite speech persuasion system.

"It feels like it's part of the dialog, that you're spending points to try and persuade them. It feels natural, not like I'm in some other mode where I'm not doing regular dialog. I'm in this mode of persuading you to get what I want."

Starfield is due out in 2023 and will be exclusive to PC and the Xbox Series X/S duo.