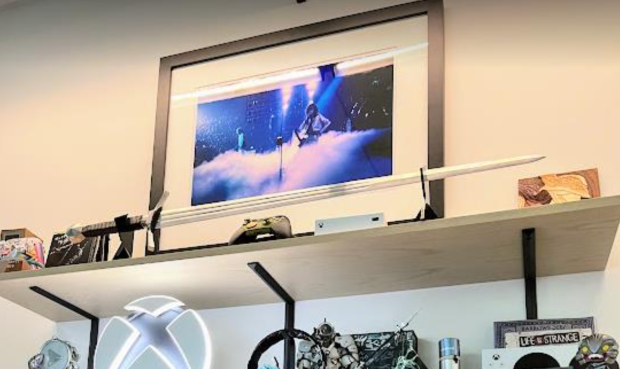 Phil Spencer's shelf is something of a celebrity in itself. At first glance, the shelf looks innocuous enough with gaming curios--there's a controller, a sword, other mementos--award plaques, and various devices. There's often secrets in the pictures, though. If the Xbox gaming boss shares a picture of the shelf then it's worth a second glance.

A closer look at the shelf shows what appears to be new Xbox system of some sort. It's too small to be a Series S, which is also pictured on the shelf. Speculation says that the device is the often-rumored Xbox streaming-only device that would allow gamers to access Xbox games entirely through the cloud, delivering instant console-free access.

The device, codenamed Project Keystone, is believed to have only the essential hardware needed for adequate cloud gaming while xCloud server blades do the heavy lifting and beam over the signal. It's notably not small enough to be the streaming-only Xbox stick that we have reported on in the past and will instead be a kind of NVIDIA Shield-like device, possibly with a lower-powered chip, aimed at cloud gaming, app launching, and content streaming.

We've been covering this hardware in one form or another since 2016. Back then, it was believed Microsoft would launch two streaming-only devices alongside the Xbox One X--a streaming stick called Project Hobart, and a set-top box.

It's likely that this new teased Xbox device is an evolution of the early set-top prototype. Microsoft has had 6 years to refine its core hardware and server technology and right now xCloud remains one of the most accessible and quality-driven streaming services on the market.

Microsoft has also teamed up with Logitech to launch the Cloud G, a mobile-only handheld that brings mobile and cloud streaming to a form factor similar to the Nintendo Switch.