Multiple people have been harmed after jumping into a foam pit at the latest TwitchCon. One streamer, former adult film star Adriana Chechik, was severely injured after performing a high split jump into the foam pit. Chechik broke her back in two places and the injury is so severe that it requires surgery to implant a metal rod into her back.

"Well, I broke my back in two places and am getting surgery to put a metal rod in for support today. Send your support. When it rains it pours and I am definitely feeling the rain right now," Chechik said on Twitter.

The foam pit was created as a "Face Off" side event where Twitch streamers would battle it out, American Gladiators style. The event was sponsored by Lenovo's Legion gaming line, which had published multiple videos of streamers competing against one another.

Twitch also did the same.

Other streamers were also hurt in the same pit. There were reports of dislocated knees and another attendee says their back still hurts after falling into the pit.

Attendees say that they had to sign a waiver at the event, however it is unclear the exact repercussions (if any) that the companies involved--Twitch, Lenovo, and Intel--will face.

The foam pit event has since been closed at TwitchCon following the videos went viral.

EdyBot, the other streamer that was in the clip with Adriana, says that they had "no idea other people had been injured" prior to going to the foam pit and that "they opened it back up after Adriana too." 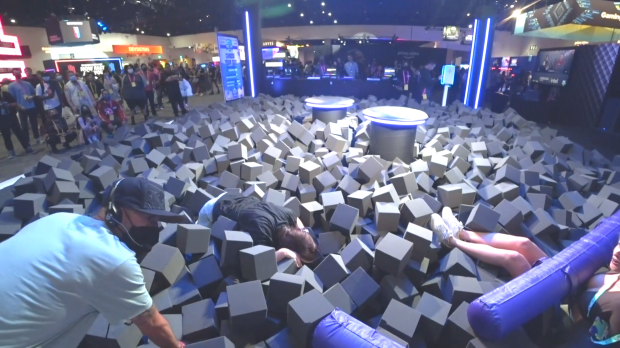