NASA has taken to its social channels to share a video that showcases a small piece of martian debris stuck to the foot of its Mars helicopter named Ingenuity.

At the end of September, NASA announced Ingenuity successfully completed its 33rd flight on September 24, where it traveled 364 feet over the Martian surface at an altitude of 33 feet. The total flight time was 55.2 seconds, and during the flight, the 4-pound helicopter traveled at a max speed of 10.6 mph to its new destination, where it will await its coming mission. NASA JPL has taken to Twitter to share a video captured by Ingenuity's navigation camera (Navcam) that reveals a small piece of debris attached to one of the helicopter's feet.

The space agency categorizes the object as "foreign object debris," and it's seen approximately halfway through the above video, where it briefly gets stuck and then falls back down to Mars' surface. NASA has conducted an analysis on Ingenuity to determine if the debris caused any damage, and according to the space agency, everything appears to be performing as expected with no damage to report. NASA says teams are now investigating the source of the debris.

For those that don't know, Ingenuity has completely exceeded all of NASA's expectations as engineers only aimed for the helicopter to perform five separate flights. Ingenuity's success on the Red Planet has been phenomenal as the small helicopter acts as a scout for NASA's Perseverance rover that is currently scouring the Martian surface for viable locations to take samples from that'll eventually be transported back to Earth. As previously mentioned, Ingenuity is Perseverance's scout, taking flight to map out strategic pathways for the rover to traverse and identifying any hazardous objects for the rover to avoid. 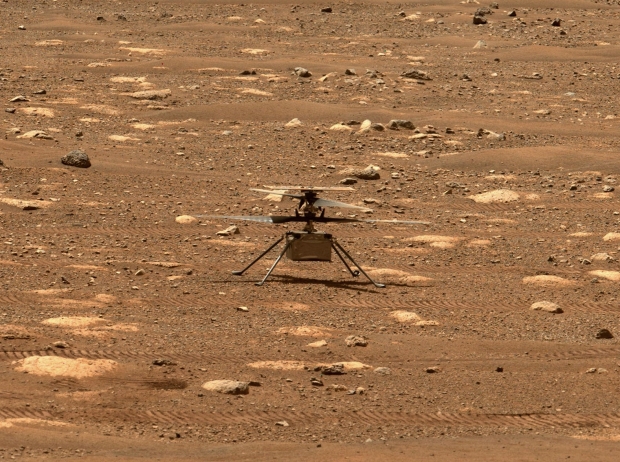 In other NASA news, the space agency's James Webb Space Telescope has observed a cosmic tarantula, and with Webb's advanced instruments, astronomers have discovered thousands of never-before-seen young stars that were previously obscured from view.

In separate news, Tesla and SpaceX CEO Elon Musk has found himself in hot water after taking to Twitter with his opinions on the conflict erupting in Ukraine and how a peace deal should be struck between Russia and Ukraine.