Embracer Group reminds gamers, shareholders, and the games industry at large that it has the largest treasure trove of IP rights in the entire market. 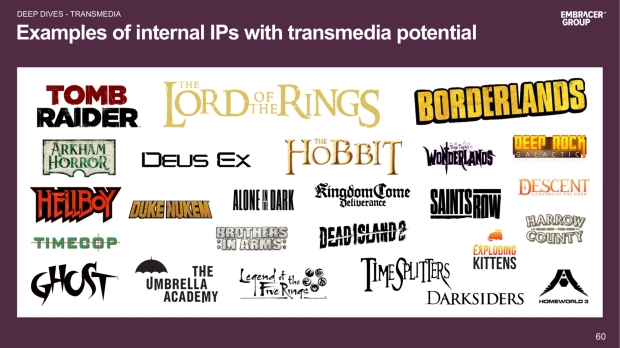 The Embracer Group is fast becoming a megaton force in creative power. The company currently has access to a whopping 816 intellectual properties with rights stretching across media like film, games, TV shows, and various tabletop/board games. This is an absolutely massive amount of properties to choose from, including heavy-hitters like The Lord of the Rings, Tomb Raider, Deus Ex, Borderlands, Saints Row...and some surprising IPs like Hellboy, Timecop, and The Umbrella Academy.

In a recent shareholders presentation, Embracer Group CEO Lars Wingefors showed an interesting slide with a bunch of IPs listed on it. Wingefors was mentioning transmedia content, which is also interesting because some of this content hasn't ever been adapted into games.

Yet Wingefors was careful to say the the slide didn't necessarily indicate the properties listed would get new games...although many of them have already been confirmed to have new game projects in development, including Tomb Raider, The Lord of the Rings, and Time Splitters.

"We have hundreds of IPs across the group. Here you can see some really strong IP that I believe have great potential to be adapted to other media. Some of them here are announced, some are not announced yet," Embracer Group CEO Lars Wingefors said during the company's recent annual general meeting of shareholders.

"I have to say this is not confirming new games and such. Not all of them have to become new media, but there's various potential."