The rumors were right: Amy Hennig's team is working on a new Marvel game starring Captain America and Black Panther. 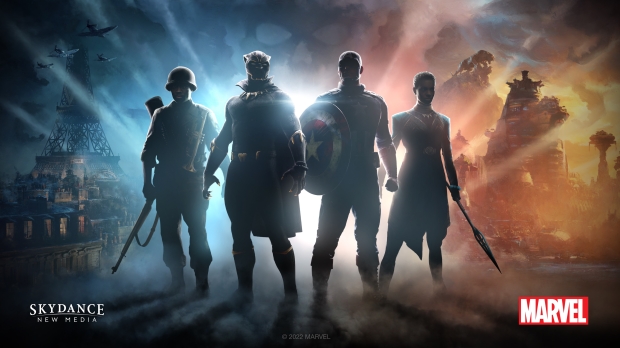 Today Disney and Marvel gave a brief teaser on Skydance's upcoming new hero game. The project, which has yet to be officially named, will feature four playable characters including a young Steve Rogers (Captain America) and Azzuri, which was T'Challa's grandfather during the World War II era. Hydra is the enemy during the game, which is described as a "narrative-driven ensemble adventure game."

No release date or other details were announced with the project and it's likely that it's still in early phases of development. Listings on Skydance New Media's recruitment pages suggest the game will be singleplayer-only and not feature any sort of online multiplayer. Amy Hennig has said the new Marvel game will feel like other titles she's worked on, which includes Uncharted.

"If you've played my previous games, it's not going to be far off the mark. It's story-driven and character-driven, and that it's sort of equally cinematic with very rich cinematic presentation. There's some very cool stuff. The visual presentation and visual fidelity is best-in-class."

Hennig goes on to say that the game will be accessible and inviting for all Marvel fans.

Skydance New Media and Marvel Entertainment's upcoming narrative-driven, ensemble adventure game is set in the Marvel Universe and features an original story that will take players on a WWII-era adventure with four playable characters at different points in the story; a young Steve Rogers, aka Captain America; Azzuri, T'Challa's grandfather and the WWII-era Black Panther; Gabriel Jones, a U.S. soldier and member of the Howling Commandos; and Nanali, leader of the fledgling Wakandan Spy Network. Skydance New Media is helped by award-winning writer and director Amy Hennig. This title marks the first initiative from the new AAA game studio.