A study on the Mars aurorae titled "Patchy Proton Aurora at Mars: A Global View of Solar Wind Precipitation Across the Martian Dayside From EMM/EMUS" has been published in the journal Geophysical Research Letters. 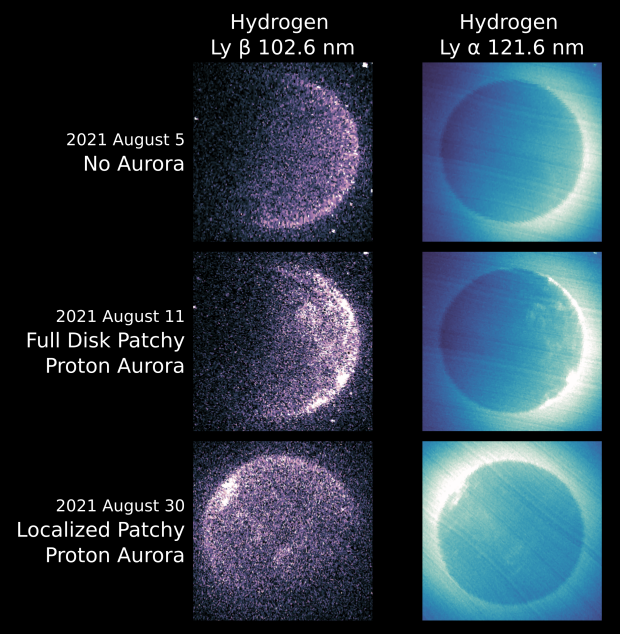 New data released by a collaboration between NASA's Mars Atmosphere and Volatile Evolution (MAVEN) mission and the United Arab Emirates' (UAE) Emirates Mars Mission (EMM) has revealed observations of multiple proton aurorae on Mars. MAVEN first discovered proton aurorae on Mars in 2018, a type of Martian aurora that occurs when the solar wind from the Sun interacts with Mars' upper atmosphere and which at the time appeared smooth and evenly distributed across the hemisphere.

Charged particles in the solar wind cause the aurorae, and sometimes turbulent conditions on Mars generate "patchy proton aurora," which EMM was able to observe. Solar wind generally struggles to reach the upper atmosphere of Mars due in part to its magnetic field, but turbulence allows charged particles to enter the atmosphere and glow while they slow down. 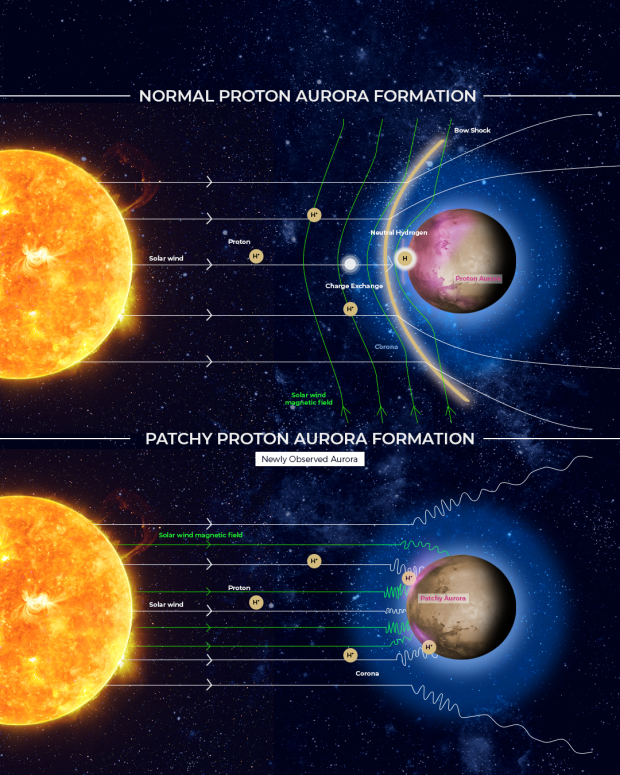 Astronomers note that while "the full impact of these conditions on the Martian atmosphere is unknown," observations of these aurorae by EMM and MAVEN will offer insight into the chaotic interaction between solar wind and Mars' atmosphere.

"EMM's observations suggested that the aurora was so widespread and disorganized that the plasma environment around Mars must have been truly disturbed, to the point that the solar wind was directly impacting the upper atmosphere wherever we observed auroral emission. By combining EMM auroral observations with MAVEN measurements of the auroral plasma environment, we can confirm this hypothesis and determine that what we were seeing was essentially a map of where the solar wind was raining down onto the planet," said Mike Chaffin, a MAVEN and EMM scientist based at the Laboratory for Atmospheric and Space Physics at the University of Colorado Boulder and lead author of the study.

"Access to MAVEN data has been essential for placing these new EMM observations into a wider context. Together, we're pushing the boundaries of our existing knowledge not only of Mars, but of planetary interactions with the solar wind," said EMM Science Lead Hessa Al Matroushi.