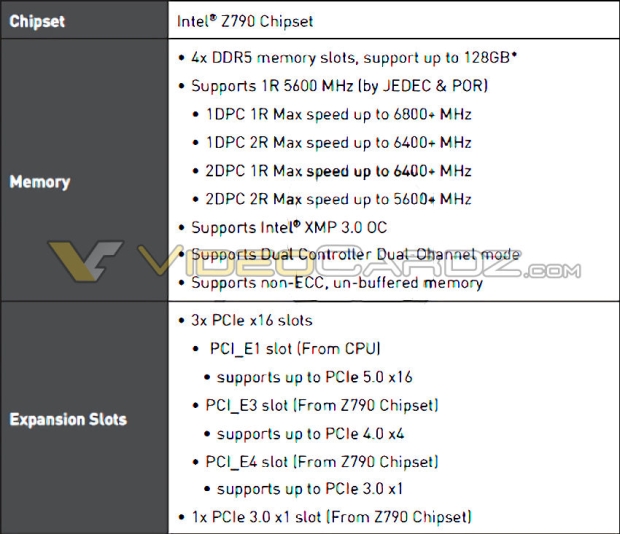 The new information is coming from documents VideoCardz received that were for MSI's upcoming Z790 range of motherboards, including their specifications. One of those documents confirmed that MSI's new Z790 motherboards will support JEDEC DDR5-5600 specs by default, which is an upgrade over the Z690 upgrades and support for DDR5-4800 by default.

MSI will also release new Z790 motherboards that will support Intel's new 13th Gen Core "Raptor Lake" CPU family, offering DDR4 memory support with up to DDR4-5333 supported in 1DPC and 1R configurations, while that's only a slight upgrade over MSI's fastest DDR4-based Z690 motherboard that taps out at up to DDR4-5200 memory.

All of MSI's new Z790-based motherboards will be using the new LGA 1700 socket, which supports not only the new 13th Gen Core "Raptor Lake" CPUs and current-gen 12th Gen Core "Alder Lake" CPUs. There's also support for the usual Pentium Gold and Celeron CPUs, too.

We will have all of the details on MSI's new Z790 range of motherboards once Intel unveils its next-gen Raptor Lake CPUs on September 29, where we'll also have the full skinny on what to expect from Intel's new CPUs and chipsets, as well as what MSI has to offer gamers with its new fleet of Z790-based motherboards.

We also don't know what AMD's new DDR5 EXPO technology will do for DDR5 memory overclocking profiles, but we will know in the next few hours when AMD announces its new Ryzen 7000 series "Zen 4" CPUs and X670 + X670 motherboards.