A two-year adventure to capture the Moon in never-before-seen detail has revealed a stunning singular image that is made up of more than 200,000 separate images. 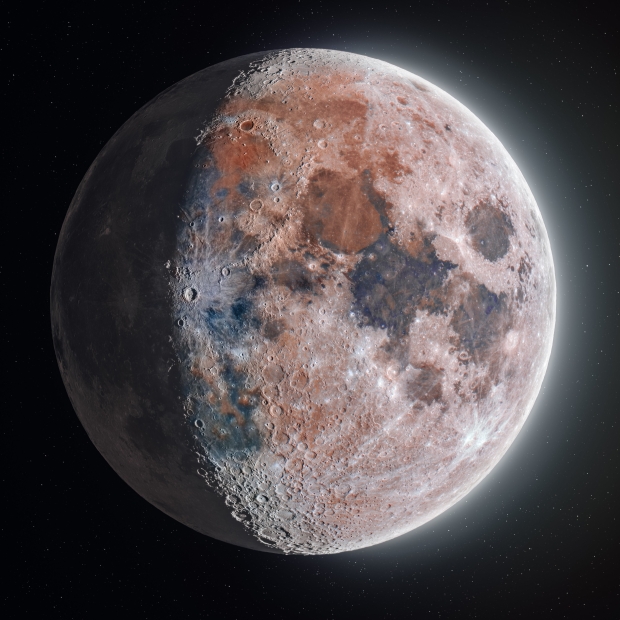 The above image was captured by two astrophotographers, Andrew McCarthy and planetary scientist Connor Matherne and according to the pair, this is "the most ridiculously detailed picture" of the Moon yet. The 174-megapixel image is made up of more than 200,000 separate images and showcases the true colors of the Moon that are typically unobservable from Earth. The Moon's surface features a reddish tinge on one side while the other is a gunmetal blue color.

The red color can be traced back to iron and feldspar oxidization that's caused by errant oxygen atoms from the Earth. While the Moon certainly looks different here when compared to typical images, the colors seen in the above image are more accurate to the Moon's true colors. Since our eyes aren't sensitive enough to view the colors, Matherne performed color correction on the image, increasing the saturation to bring out the red and blue we can now see.

McCarthy spoke to NPR and said that the image is "assembled like a mosaic", with every tile seen being made up of thousands of photographs taken over a two-year period. McCarthy took to Twitter to reveal the inspiration behind the image, saying that the pair of astrophotographers were inspired by NASA's commitment to getting humans back on the Moon, specifically the upcoming Artemis 1 mission. McCarthy said that this incredible image of the Moon is a "love letter" to the Artemis 1 mission, which is scheduled to launch no earlier than August 29.

As for the Artemis 1 mission, NASA has recently moved its Space Launch System (SLS) rocket to its launch pad at the Vehicle Assembly Building at the Kennedy Space Center in Florida, where the 322-foot-tall rocket will undergo its final checks before it blasts off on a reconnaissance mission around the Moon.

The plan is to send the rocket along with NASA's Orion capsule on a journey around the Moon, gathering vital intelligence about the journey that will be used to increase the safety of human astronauts scheduled to go on the same journey in 2024 - Artemis 2.