Reports indicate that a new species of dinosaur has been discovered in New Mexico as researchers delve into collected specimens. 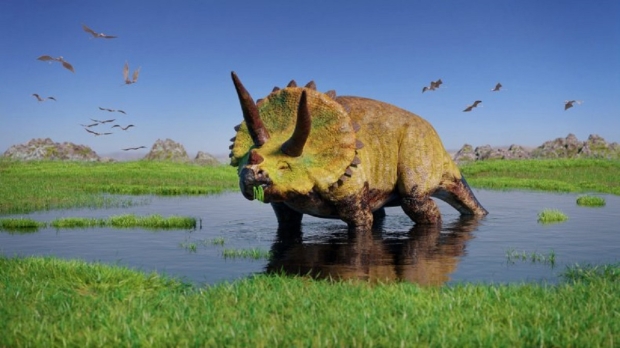 Newsweek reports that the new species of dinosaur is called Bisticeratops froeseorum, and it was first discovered in 1975 in the Upper Cretaceous rocks located in the San Juan Basin, New Mexico. A team of researchers came across what seemed to be a bone sticking out of the ground, and upon further investigation, discovered the bone was attached to an entire skull that was nearly complete. After decades of analysis, researchers weren't able to link the skull to a species until now.

The official new species is believed to have existed about 74 million years ago during the Cretaceous Period, which was the last period before the asteroid assisted the dinosaurs into their extinction. Bisticeratops froeseorum is a member of ceratopsid dinosaurs, quadrupedal herbivores from the Upper Cretaceous that walked on four legs. Dinosaurs such as the recognizable triceratops were also a member of this family, making the new species a distant cousin.

"While only the skull of Bisticeratops was recovered, this fossil gives us a lot of information about horned dinosaurs at a time and place that was unique. While other ceratopsids are known from older strata in this region, Bisticeratops potentially shows us the next step in the evolution of these horned dinosaurs in this region and fills in a gap leading to the last ceratopsid dinosaurs in this region before their extinction at the end-Cretaceous mass extinction," said Dr. Steven Jasinski, a professor at Harrisburg University of Science and Technology.