A study on the Tonga volcano explosion titled "Energetic output of the 2022 Hunga Tonga-Hunga Ha'apai volcanic eruption from pressure measurements" has been published in the journal Shock Waves.

Researchers from the University of Sheffield have compiled a new dataset relating to the Hunga Tonga underwater volcano eruption on January 15th, 2022, comprising data from weather stations across the globe and social media. The dataset was compared against historical data of the most powerful human-made explosion ever, produced by the Tsar Bomba nuclear bomb, showing the eruption released even more energy than the bomb.

The eruption generated acoustic-gravity waves that were detected at the edge of space by satellites and various instruments worldwide. Weather stations across the planet detected a passing Lamb wave, a type of acoustic-gravity wave, that resulted in local atmospheric pressure spiking before dropping over about 45 minutes, compared to the effect earthquakes have, which typically last between a few seconds and a few minutes.

Researchers and citizen scientists worldwide shared their measurements of these Lamb waves on social media, allowing the Sheffield team to determine the size of the volcanic eruption using the provided location data, pressure data, and local time of arrival of the Lamb wave.

"The Hunga Tonga-Hunga Ha'apai eruption was without a doubt one of the most energetic events to have occurred over the last century, more so than the largest nuclear bomb ever detonated," said study co-author Dr. Sam Rigby, senior lecturer in blast and impact engineering at the University of Sheffield.

"The eruption was equivalent to around 61 Mt of TNT, whereas the Tsar Bomba released between 50-58 Mt. The Tonga volcanic eruption released energy equivalent to a magnitude 8.4 earthquake, and the pressure wave traveled several times around the globe," continued Rigby.

You can read more from the study here, and access their dataset on Github here. 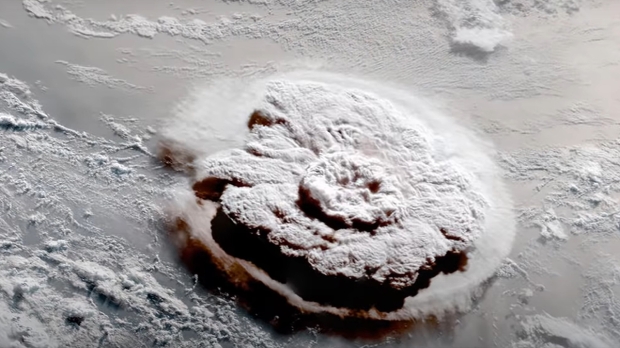