The Ameca robot was first revealed at the end of 2021, and publicly viewable at CES 2022.

The robot was created by Engineered Arts, which displayed it at CES earlier this year. Since then, Ameca has been upgraded with twelve additional actuators in its face, to allow it to realistically recreate more facial expressions than ever before, and fluidly shift between them. Facial expressions for the first generation that was ready in January 2022 include putting on a large smile, appearing thoughtful, angry, or surprised.

It has also been programmed with to pair gestures with various facial expressions to emulate a yawn, shrugging, pointing, waving, being gobsmacked, shushing someone, or indicating they want someone to repeat themselves more loudly. Ameca's construction includes sensors that can track movement throughout a room, cameras in both of its eyes, and a high-resoltuion camera mounted on its chest.

With this hardware, Ameca can detect and recognize faces approximately two meters away and use facial tracking to estimate emotions, age and gender. These functions appear to be on display in the newly released video, showing Ameca appearing to recognise itself in the mirror, displaying expressions of curiosity, intrigue, wonderment and awe as it interacts with the mirror and its reflection.

Ameca also features hand tracking, multiple voice recognition and other interactive elements. With these and the new facial hardware in place, the team behind Ameca will set their sights on improving the Tritium operating system Ameca runs on to fully harness the new potential to continue to push the limits of how robots and humans interact. 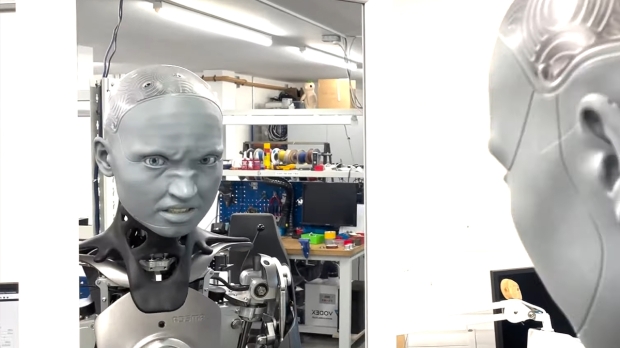