A man has hacked a Tesla Model S Plaid and broken the in-built top speed cap while driving the car at an airport.

A report from Electrek has revealed that a man named Guillaume Andre, the CEO of Ingenext, a Canadian company that focuses on selling kits that unlock certain parts of Tesla's, has taken a hacked Tesla Model S Plaid to Trois-Rivieres airport in Quebec, Canada. Andre drove a white Tesla Model S Plaid, and according to the above video, the vehicle didn't require many modifications to get past the top speed limitation of 175 mph.

The company designed a module that bypasses Tesla software, granting the driver the full use of the vehicle's hardware capabilities. In the above video, Electrek can be heard describing the sound of the Tesla Model S Plaid racing down an airport runway at 216 mph as a "jet engine". According to reports, the 216 mph top speed achieved by the unlocked Tesla Model S Plaid is the fastest publicly recorded time for the vehicle. During the test, the driver ran out of runway and needed approximately 6,000 feet to bring the car to a stop safely.

Notably, when the Model S was driven back over to the group of onlookers, the electric motors and battery could still be heard cooling down. The only modifications to the vehicle were higher performance brake pads and wheels, as Electrek explains in the video, were purely for safety purposes as driving a car at such high speeds with inadequate breaks and wheels can significantly increase the risk of a crash.

As pointed out in the above video, when the Model S reached above 185 miles per hour, the color of the speed meter changes from the stock white to red, indicating that this speed isn't intended for the vehicle. Furthermore, Andre didn't use Launch Mode to reach 216 mph, which, according to Electrek, is typically used to reach extreme speeds with Tesla vehicles. 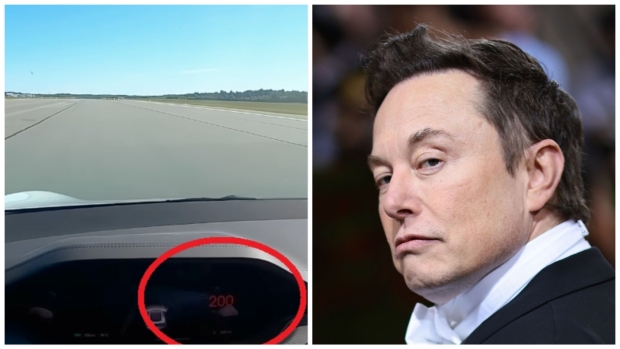