Oh, you just purchased AMD's new Ryzen 7 5800X3D processor and can't overclock it... but own an MSI motherboard? MSI has just introduced Kombo Strike, a new feature inside of a BIOS utility MSI has just announced. 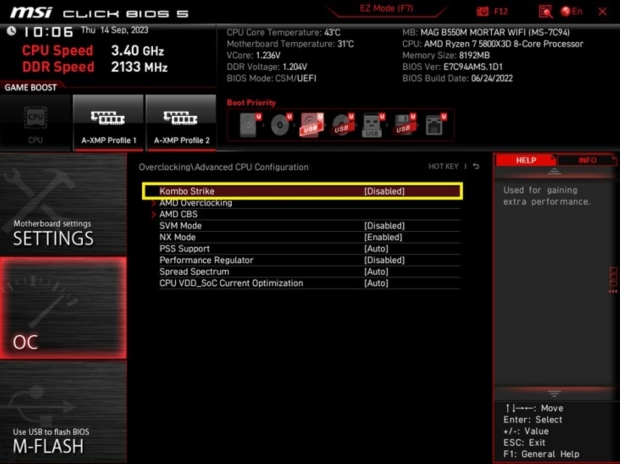 MSI's new Kombo Strike feature is on its AM4-based 500-series motherboards -- in beta BIOS form, so be careful -- providing increased performance (up to 5% more performance) and undervolting support for AMD's new Ryzen 7 5800X3D processor with its new 3D V-Cache technology.

The new feature allows for an unlocked, higher power limit for AMD's new Ryzen 7 5800X3D processor: so you'll need a kick-ass cooler -- preferably a good AIO cooler -- where you'll get up to 5% more performance with MSI's new Kombo Strike feature enabled. In order to use the Kombo Strike feature, go into the "Overclocking / Advanced CPU Configuration" panel with 4 options: disabled, 1, 2, and 3. The higher the number, the more power, and performance, thus more cooling is required: take note. 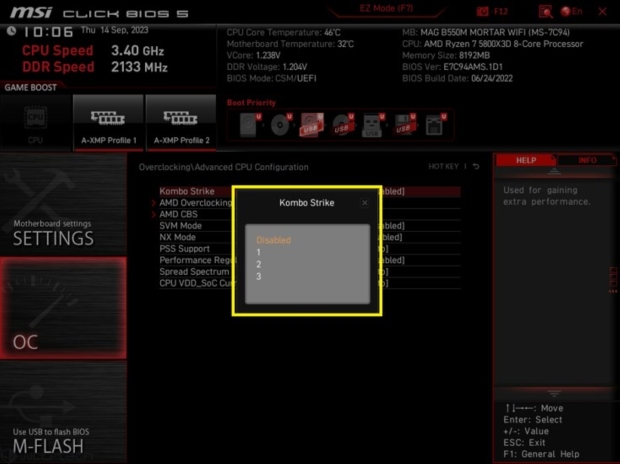 If you've purchased AMD's new Ryzen 7 5800X3D processor and wanted to enjoy some more performance being pulled out of it for free, then you can try the beta BIOS on your compatible MSI 500-series AM4-based motherboard. I've got a list of those motherboards below: