AMD's new Ryzen 7 5800X3D processor with its flashy new 3D V-Cache technology has been delidded, with some impressive results. 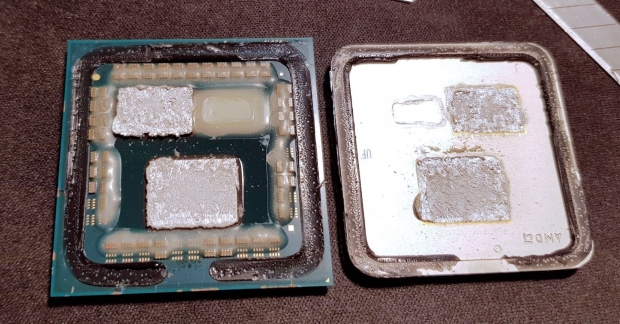 Before the Ryzen 7 5800X3D was delidded, his chip (because all chips won't perform the same) was hitting an average CPU clock of 4436MHz, meanwhile, it had a minimum of 77C, an average of 78C, and maximum of 80C temperatures.

After the Ryzen 7 5800X3D was delidded, the average CPU clock was 4450MHz, while temperatures dropped to 64C, 67C, and 70C for minimum, average, and max. That's an impressive feat: 10C cooler with the delidding process (and cooled with the Noctua ND-D14 cooler, by the way).

We aren't told what CPU loads the chip was put under, but you can see there that the average CPU load was 17-18% on both tests. The max CPU thread load was an average of 38-39% while the maximum was 67-75%. They could be benchmark or gaming loads, but they're more realistic than loading every single core... still, I want to see the results.

It's an interesting thing to see as a nerd, as the luxurious AMD 3D V-Cache technology is built as an additional layer of L3 cache onto the CPU core chiplet. This additional layer isn't just a layer of super-fast L3 cache, but also adds as another layer of complexity when it comes to delidding the CPU.