Blizzard is treating Diablo II Resurrected (D2R) like a live game with rotating events...and the first one is pretty epic. 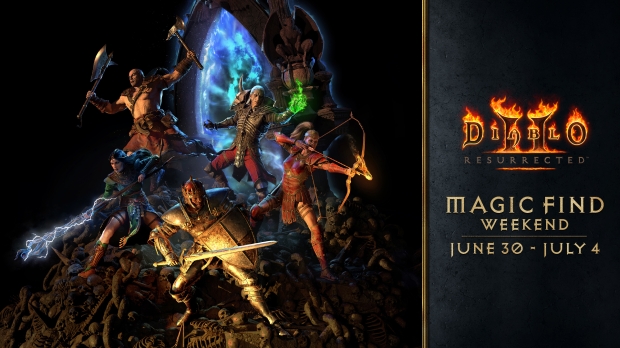 Today Blizzard made history in Diablo II by announcing a new timed event that could lead to much more interesting gameplay. Introducing Diablo II's Magic Find Weekend, a new event held from June 30 to July 4 that will temporarily boost magic find rates for all players across the globe. Gamers will get a flat +50% to MF that stacks with their existing magic find.

"You feel an intense rush of energy coursing through your veins, a faint internal humming overriding your own pulse. From June 30-July 4, a mysterious energy source will grant you a 50% buff to Magic Find, providing an increased chance to receive Magic, Rare, Set, or Unique loot as a drop from slain foes. This bonus stacks with any additional increases to Magic Find provided by your items," Blizzard said.

As a long-time Diablo II player I have never seen anything like this before. The Magic Find Weekend may not seem like much, but it opens the door to exciting new possibilities and timed events, possibly even new Pandemonium Events that may only be available for a specific window.

It also opens the doorway to more monetization. This implies that we could get a seasonal style event structure that extends beyond the current ladder system. If that's the case, we might even get a season pass type of add-on that grants access to these rotating, limited-timed events (I hope I'm wrong, but Activision-Blizzard is aggressively monetizing all of its games right now).

Blizzard is also making the following changes and adjustments: