The Novoshakhtinsk oil refinery in the Rostov Oblast of Russia was struck by a drone, potentially of Ukrainian origin, on Wednesday, June 22nd, 2022.

Ukraine has not claimed responsibility for the supposed attack. However, it has been using drones throughout its ongoing conflict with Russia, notably, 'suicide' drone models like the Switchblade have been sent to the country by the United States. The governor of the Rostov region, Vasily Golubev, confirmed the incident and noted that the remains of two drones had been found in the territory of the Novoshakhtinsk refinery.

Oil refinery workers captured the drone's approach and impact on video, with one asking "do you think it's Ukrainian?" and another responding with "of course not." The Rostov Oblast borders with Ukraine, but Russia has not admitted to any incidents of conflict crossing into its territories. According to The Guardian, no one was injured in the explosion at the refinery. 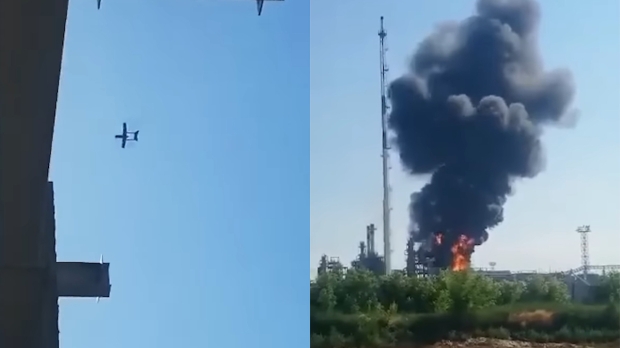