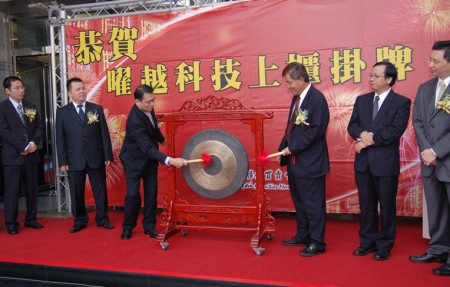 Thermaltake first started business in 1999 with the dream of creating high quality cases and coolers for DIY users and yesterday as a real indication to their growth made their first initial public offering (IPO) on the local Taiwan Stock Exchange. At preess time we were unable to source any info on the TSE website about stock price.

It is unclear the reason for deciding to go public other than the Taiwanese company probably has big plans. We will dig deeper and try and find out what exactly we can expect in the future.

Started from the passion for the DIY (Do It Yourself) concepts and the desires to realize the goal of "Ideas are originated from humanity; Realizing ideas is our belief." Thermaltake Technology was established in January, 1999 and has been market to the world with "Thermaltake" brand name ever since. Thermaltake not only equip premium quality and functionality on its Case, Cooler, and PSU, but also provide attractive product appearance through extensive effort on industrial design. Thus, Thermaltake products spread rapidly among the enthusiasts in DIY market and soon become the number one choice for PC DIY enthusiast worldwide.