One of my favorite games of all time would have to be Flashback, a game that is -- 30 years later -- getting a sequel. Flashback 2 now has a release window, where it will hit the PC and consoles later this year.

Details are scant on Flashback 2, but we do know that publisher Microids has announced Flashback 2 is currently in production and the release is later this year on PC, PlayStation 5, PlayStation 4, Xbox Series X, and Xbox One. The portable Nintendo Switch will enjoy some on-the-go Flashback 2 sometime in 2023.

What we do know about the game is that it will feature puzzles and action, just as the original did -- with familiar locations including Neo Washington, through to a jungle -- with new locations for players like a mysterious space station, and Neo Toyko. Flashback 2 enjoyed a slick gameplay teaser during the recent Summer Games Fest, where we get to see platforming, climbing, and more.

It gives me chills just to know there's a Flashback 2 in development, where I truly don't want to have my hopes crushed as they have been for many games like this. I do have more faith in it given that the director of the original Flashback, Paul Cuisset, is involved with Flashback 2.

Microids tweeted on May 5, 2021: "Flashback 2 is in production and will launch in 2022 on consoles and PC. Stay tuned for more information". 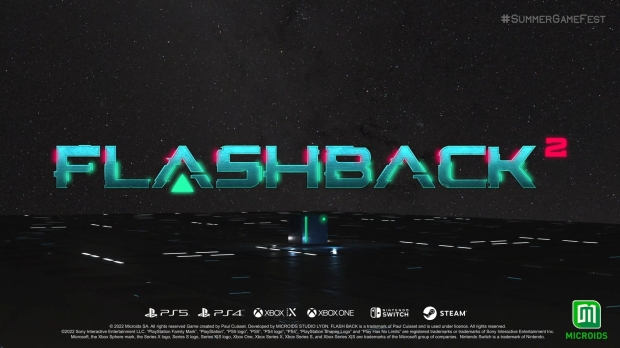