From the early days of the NES to the modern Switch, Nintendo has sold billions of games across its mighty lineage of hardware. 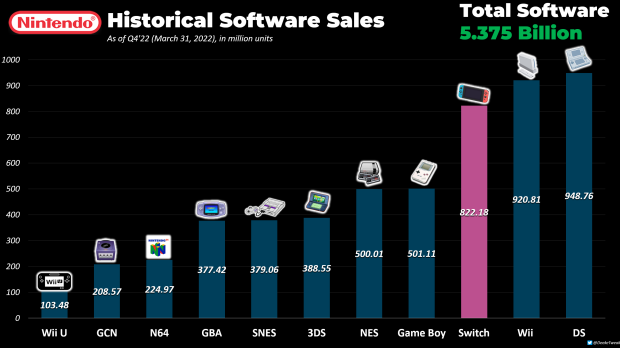 Nintendo has sold nearly 5.4 billion video games across all of its handheld and console platforms, new data reveals. According to our calculations, the Nintendo Switch is currently the #3 platform in software sales with 822.18 million units sold to date. The Wii is in second place with a mighty 920.81 million, and the DS conquers with 948.76 million.

These numbers actually put Nintendo in second place. Although Nintendo has been on the market for many years before Sony, the PlayStation platform has sold an estimated 5.71 billion games. Sony has a 300 million+ lead over Nintendo.