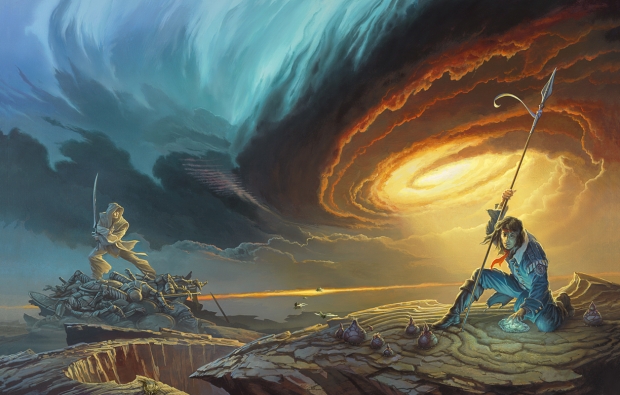 Some weeks ago, Bandai Namco sent Mistborn and Stormlight Archive author Brandon Sanderson a special Elden Ring package that included a sword, a cloak, the game, and other collectibles. In the package was a note saying the publisher would like to collaborate with Sanderson on a new game, no doubt prompted by Elden Ring's amazingly successful input from George R.R. Martine.

"They are interested in perhaps doing something together. I am as well," Sanderson said in a recent podcast.

Sanderson said he has been thinking about the possibility of making a Soulsborne game for some time.

"If I were ever going to do a Soulsborne game, what would I do? So you know I've spent the last...it's like when I wondered what I'd do if I made a Magic The Gathering story, so I spent 4 years developing a Magic The Gathering story just in case they contacted me. The same way I've been thinking about a Soulsborne sort of game. Obviously I don't get to decide that, but I have it in the back of my head. I have some ideas."

Interestingly enough, Sanderson is already working on a video game. The title hasn't been announced and none of gaming's biggest publishers have discussed any projects with Sanderson, but that could happen sometime in 2022.

"I've been working on a video game for several years, and I suspect it will be announced this [coming] year," Sanderson said in December 2021.

"So, commence speculation! (Note: it's not for one of my properties, but something new that I built with them. It's a game company many of you will have heard of, but probably not the one you're thinking about right now. Not that other one either.)"