NASA's Perseverance rover landed on the Red Planet in February 2021, and since then, it has been exploring the Jezero Crater.

Perseverance landed on Mars on February 18, 2021, and has since spent 414 days on Mars conducting science and taking images. The rover has ventured quite the distance and has taken several core samples of Martian rocks that will eventually be transported back to Earth. On April 6, the rover snapped some images of the terrain that surrounds it, and one hawk-eyed Twitter user identified what seems to be Perseverance's parachute in the background of one of the images.

The remains of the parachute, along with its exact location, were identified by NASA's Mars Reconnaissance Orbiter back in 2021, and according to reports, the location of the parachute is only half a mile south of Perseverance's current location, which means it may be possible that Perseverance's mast cam has enough perch to spot the year-old relic.

Notably, NASA hasn't confirmed that the object in the image is the parachute, but hopefully, the space agency does and decides to visit the parachute to inspect how the fabric has held up in the harsh martian winds. 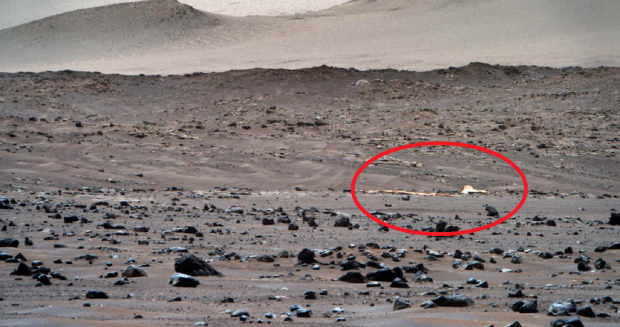