The time a NASA astronaut can spend in space is limited by their exposure to ionizing radiation over their career. 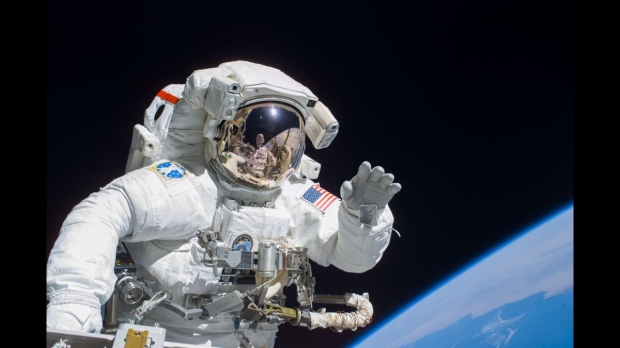 While on Earth, Earth's magnetosphere and atmosphere protect us from ionizing radiation coming from space, primarily from the Sun. The International Space Station (ISS) doesn't receive the same protection from the atmosphere but is still shielded from some ionizing radiation thanks to the magnetosphere. This means astronauts receive higher doses of radiation than those who never leave Earth, about 300 mSv per year on the ISS compared to 3.6 mSv on Earth.

Associated with the higher levels of radiation exposure are increased risks of radiation sickness and cancer. To mitigate this, NASA's current limit for radiation exposure, set in 1989, allows for a maximum of 3% lifetime excess risk of cancer mortality. Both sex and age impact this limit, creating a range of limits from as low as 180 millisieverts (mSv) of radiation for a 30-year-old woman and as high as 700 mSv for a 60-year-old man.

A study of mortality rates in atomic bomb survivors drove NASA's decision to keep radiation exposure limits lower for women. The study found that women exposed to high radiation levels for similar lengths of time to men had over twice the risk of developing lung cancer. NASA is now considering updating its exposure limits, with a potential blanket limit of 600 mSv for all astronauts, with the possibility of a waiver allowing for up to 900 mSv. By comparison, the European, Canadian, and Russian space agencies allow for career exposure limits of up to 1,000 mSv.

"In order to reach that equality, [women] could receive a higher dose than they currently can, at higher exposure than they currently are allowed. We discussed that at great length as an ethical issue. It's a question of the balance between what the impact of that slightly higher dose was likely to be versus the equality of career opportunity. We proposed NASA could proceed with that approach," said R. Julian Preston of U.S. Environmental Protection Agency's Radiation Protection division.

"If [NASA] decided that this is a critical mission, and there are certain astronauts who are critical to that mission who would exceed their career exposure, NASA could apply a waiver to that, and it was built into their overall [exposure] standard. [It's] quite a complicated ethical issue, but it would be necessary in order to go to Mars," Preston continued.