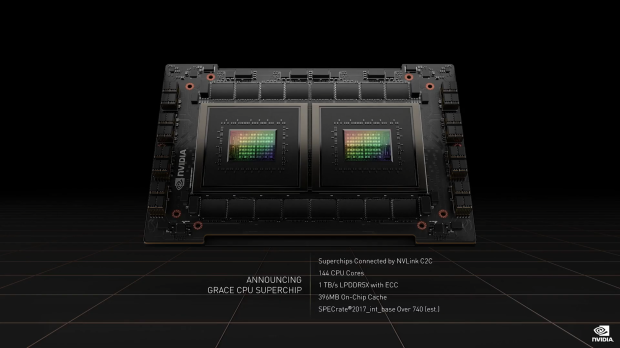 The new NVIDIA Grace Hopper Superchip has been designed for giant-scale AI and HPC (high-performance computing) use, we have NVIDIA's in-house Grace CPU + Hopper GPU combo, with an insane 600GB of GPU memory, 900GB/sec of coherent NVLink interface, and it runs the NVIDIA Computing Stack software suite.

There's a huge 30x system memory bandwidth to the GPU improvement over the DGX A100 here, with a CPU and GPU that were designed for giant-scale AI and HPC. The 900GB/sec of coherent interface is 7x faster than PCIe 5.0 which is only just dropping into gamers' desktops now, with PCIe 5.0-enabled GPUs launching this year. 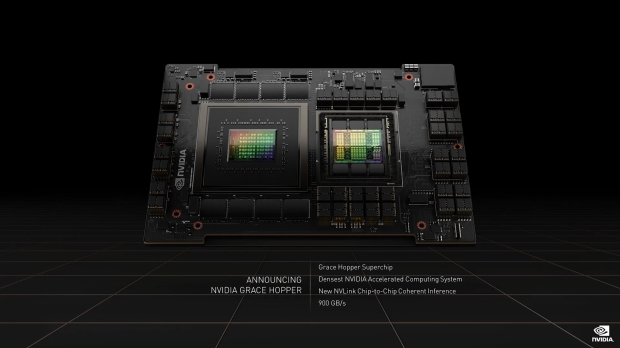 That might not sound like much, but based on previous estimates on performance these numbers were at the 300-ish level, and now we're pushing 740. That's a 2.5x increase since NVIDIA first unveiled its new Grace CPU architecture.

NVIDIA's new Grace CPU not only packs 144 ARM v9 CPU cores, but it's the world's first with LPDDR5X memory, with 1TB of memory bandwidth. The new Grace CPUs will chew through some power, with 500W of power expected to be required.