A reporter has staged a public protest live during a news segment that has since sent shockwaves through Russian society.

Marina Ovsyannikova, the reporter for the state-owned Russian news network, was an editor of Channel One, and during a recent news segment, she held up a sign that read Russians were being lied to about the war and not to trust the news channel she was working for. The sign also called for "No war", and featured an English sentence that read, "Russians against war".

According to a report from CNN, Russian President Vladimir Putin passed a law that allows Russian authorities to imprison any individual that speaks out against the Russian government for 15 years. After the live protest, Ovsyannikova was detained and transferred to the Ostankino police department. CNN spoke to Yakov Kronrod, an American that traveled back to Russia to care for his sick grandmother, who said that the live protest has blown up throughout Russian society.

"It sends shock waves through all of Russian society. Yandex News had a story about it, and they rarely have anything that's against the main narrative. Her Facebook page was getting thousands of people commenting every minute. Literally, it exploded. Everyone was texting each other, calling each other saying, did you see? Did you see what happened?

And many of the human rights activists that I'm talking to feel this may very well be the start of the wave to see someone like that Channel 1 has 250 million viewers, it's the number one watched station by most common Russians. For a lot of Russians, this was the first time they saw any dissenting voice," said Kronrod. 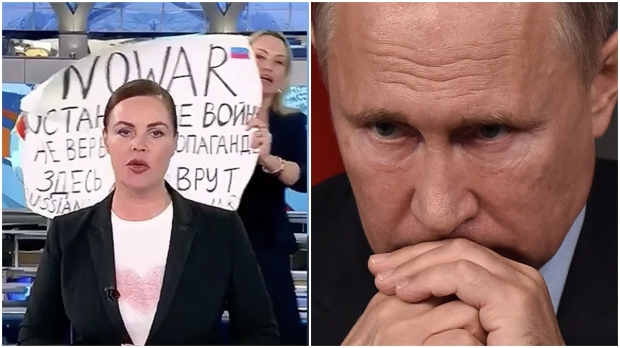