The upcoming Intel Core i9-13900K will succeed the 12th Gen Core "Alder Lake" flagship Core i9-12900K, with the Raptor Lake-powered CPU now in testing and is as fast as the 12900K during its ES (engineering sample) phase.

We're looking at a larger 24 cores and 32 threads for the Core i9-13900K, up from the 16 cores and 24 threads on the Core i9-12900K. Ashes of the Singularity isn't up for the task of differentiating between the physical and logical cores (thanks to Alder Lake, and Raptor Lake having a hybrid architecture with P-cores and E-cores).

Intel will be using its in-house Intel 7 process node for its upcoming Core i9-13900K processor, with the latest Raptor Cove and Gracemont Enhanced CPU cores. Not only will there be more cores, but there'll be up to 68MB of local cache -- something AMD is forcing Intel to do. 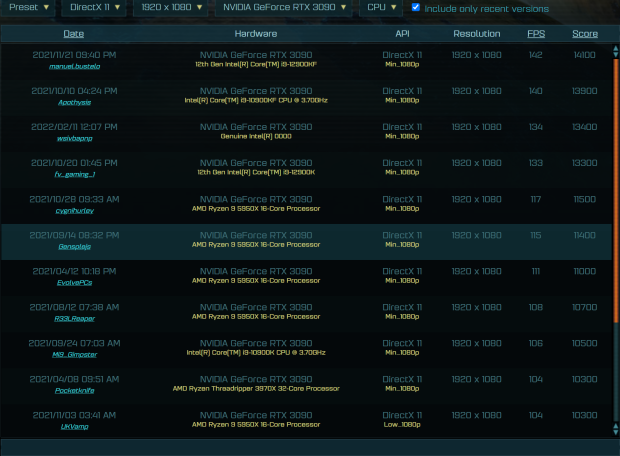 As for the Ashes of the Singularity benchmark, an Intel Core i9-13900K processor was used with 32GB of RAM (DDR5 probably) as well as NVIDIA's current flagship GeForce RTX 3090 graphics card. The Core i9-13900K "ES" processor is offering similar performance to the current Core i9-12900K, which is impressive -- as there's still many months to go before Raptor Lake roars onto the market.

Here's a list of Intel Raptor Lake CPUs we should see, and core + cache counts:

As for the SKUs, here's what to expect from Intel's upcoming 13th Gen Core "Raptor Lake" CPUs: