With more than $23 billion NFT trades in 2021, mobile titan Zynga wants in on the craze. The game developer is currently ironing out early details of new blockchain-based games with play-to-earn features. Zynga hasn't outlined exact plans, but the general idea is that gamers will be able to play, earn, and own digital assets that can then be re-sold on a marketplace for cryptocurrency.

NFTs have proven to be a wildly speculative market for major game publishers. Square Enix and SEGA have expressed interest. Konami and Ubisoft have both launched their own NFT line but the assets made less than $200,000 overall, which is a drop in the bucket to both companies who make mega millions from microtransactions. 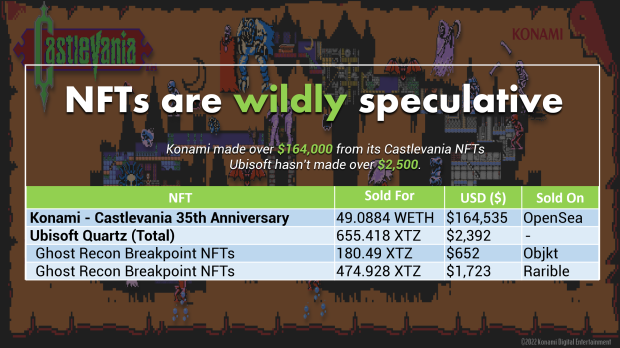 Ubisoft's NFTs, for example, have made less than $3,000. We've previously said that Ubisoft simply doesn't understand the NFT resale market and if nothing changes, its Quartz NFTs are a loss-leader waiting to happen.

The team is small right now, about 15-20 people, but Zynga wants to accelerate to 100 developers. Zynga's internal teams will have the choice whether or not they want to work on blockchain games.

"We don't want to bring them something that they didn't ask for, and we don't want to assume that they want a super, super deep gameplay experience," Zynga's blockchain director Matt Wolf said.

The upstart could be disrupted by Zynga's merger with Take-Two Interactive. The $12.7 billion deal would see Take-Two and Zynga joining forces, and Take-Two CEO Strauss Zelnick has been hesitant on NFT support.

Here's Zelnick's comments on NFTs and blockchain from a Q2 earnings call:

"It's certainly going to happen and NFTs will take us there. The question is how do you do it in a way that you don't hurt your consumers. I have zero interest in creating some exchange that solely buys and sells Dutch tulips in the 1600s. That's what we're doing now with NFTs and cryptocurrency.

"Yes, however are we going to bleed over into gambling--well not unless we're regulated and honest about it, straightforward and even then I'm not sure it fits here but we're certainly not going to pretend a speculation is entertainment. Even if we could make money doing it."