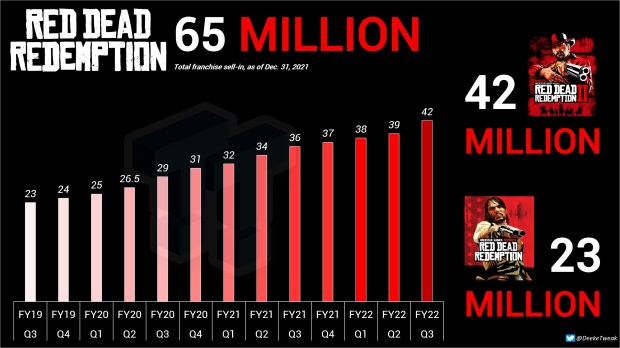 Although Red Dead Redemption 2 pales in comparison to GTA V, the dramatic western has sold roughly 1-2 million copies per quarter since release. Q3'21 saw the biggest jump in sales with 3 million and Take-Two attributes the spike to holiday sales and price markdowns.

Take-Two also says Red Dead Online outperformed their expectations for the quarter and contributed meaningfully to over $545 million revenues earned from microtransactions.

This isn't much to assuage the ongoing #SaveRedDeadOnline movement that calls upon Rockstar Games to deliver more meaningful content to the monetized online mode.

Take-Two says Rockstar is committed to supporting the game with ongoing modes but neither the publisher nor the developer have acknowledged the movement.