The Steam Deck is a gargantuan among smaller pocket-friendly handhelds. 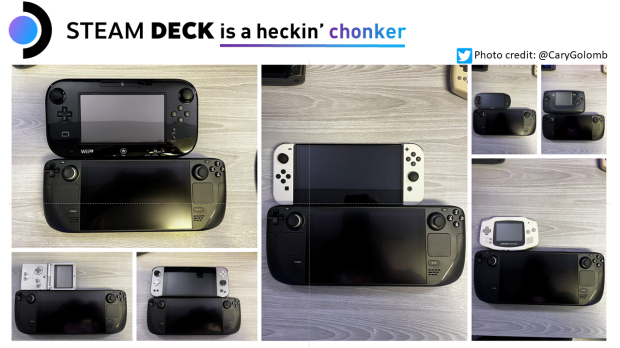 Valve's new Steam Deck is big. Just how big? It's a heckin' chonker, to borrow a phrase from the parlance of our times. New size comparison pictures from gaming YouTuber Cary Golomb shows the Steam Deck's overall thickness--it's even wider than Nintendo's monstrous Virtua Boy.

The Deck is bigger than any other handheld ever made...and rightly so, because it's basically a PC that you can hold in your hands. Valve's new hybrid system packs a seriously powerful custom AMD SoC with an RDNA 2.0 GPU and Zen 2 CPU that's powerful enough to play most games at decent performance targets, but the core SteamOS fabric ensures smooth compatibility too. 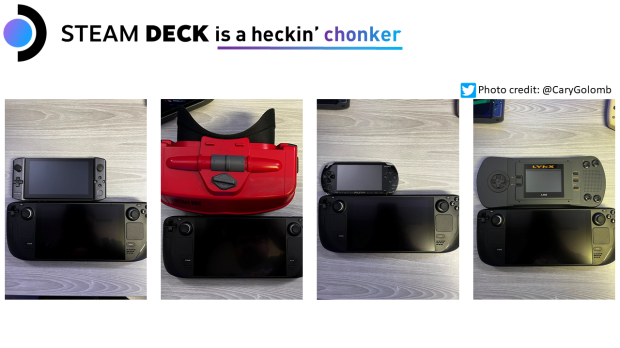 One of the most impressive things about the Steam Deck (other than its intimidating size) is the quick resume-like function that lets you suspend a game session and jump right back into it later on.

Oh, and the Steam Deck can be docked just like a Nintendo Switch and be used to play games on your TV (or monitor). It's essentially a three-in-one: a PC, a console, and a handheld portable.

Valve will start shipping the Steam Deck on February 25, 2022, so be sure to pay the invoice once it arrives in your email. If you don't, someone else will get your reservation.