Diablo 2 Resurrected's new v2.4 patch is expected to change up the meta with a host of new runewords, character rebalances, and gear adjustments. A new D2R runeword has been revealed...and it's kind of odd. 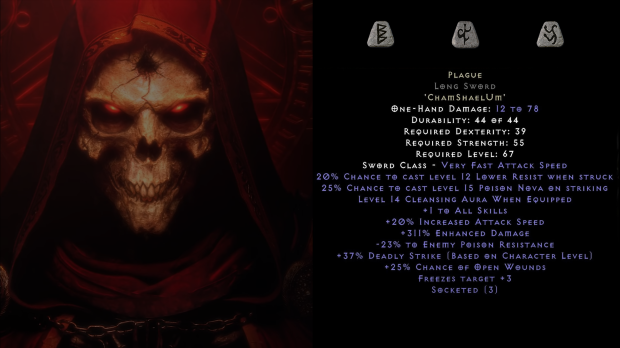 A new D2R runeword has leaked. This time it's a revamped version of Plague, a classic runeword that was originally slated to release in Diablo 2 Lord of Destruction v1.15 but was withheld.

For some reason, Blizzard has changed up Plague's stats a bit. Plague's order has changed to Cham + Shael + Um, a hefty cost but also a new use for the under-utilized Cham rune. The new version of Plague reads like some strange experimental build that has a very specific use case. Everyone's trying to figure out why you should use Plague over something like Hoto or even a powerful melee weapon like Grief or Breath of the Dying. 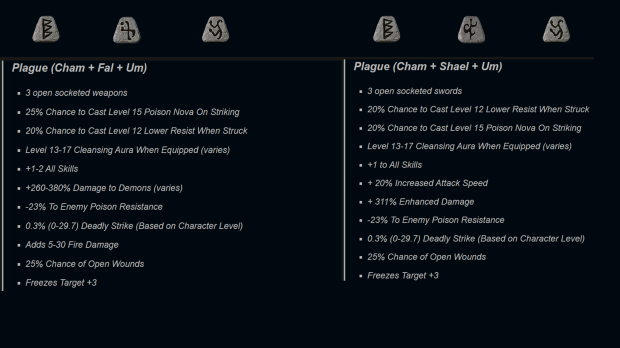 The biggest change is that Plague now uses 3 socketed swords instead of general weapons. Another change is -1 to All Skills, and the removal of +strength since Fal is no longer used. Enhanced damage has been added, which is a big bonus for raw damage. The other stats are basically the same.

Plague was strange at the beginning, but it had its uses, possibly for casters; YouTuber Drunski125 notes that Plague being restricted to swords only is a mistake.

"If you could it in scepters, imagine a +3 Fist of Heavens scepter that you roll Plague in, gives you cleansing aura and an additional skill point; again incentive for something other than Hoto. Let's say for a trapsin you get a +3 light sentry or +3 death sentry claw, you could roll Plague, get +4 to traps, cleansing aura--again, more incentive to use something other than Hoto."

Blizzard has yet to announce when Diablo 2 Resurrect's v2.4 is coming out.