The European Space Agency (ESA) has posted to its blog about a new planet that was recently discovered and how it has taken a strange shape. 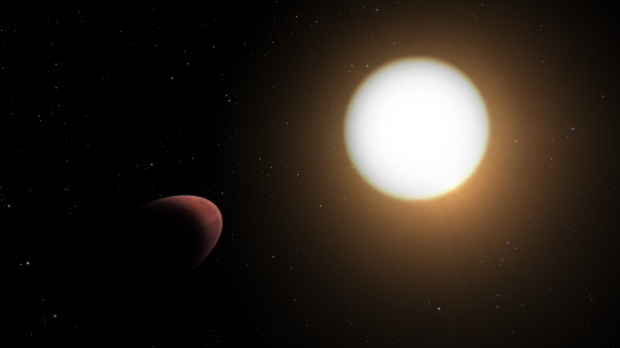 The blog post found on the European Space Agency website states that the agency's exoplanet mission dubbed Cheops has discovered a planet called WASP-103b. The planet was discovered in the constellation Hercules, and due to gravitational forces between the planet and the host star, WASP-103b is a deformed planet that resembles the shape of an NFL football.

Earth experiences the same gravitational tugging as WASP-103b does, but just on a much smaller scale since our planet is very far away from the Sun. However, WASP-103b is almost twice the size of Jupiter with 1.5 times its mass, and completes an orbit of its host star in just a single day. Due to WASP-103 b's proximity to its host star, astronomers previously theorized that the planet would experience immense gravitational tides, which have now been confirmed with the data acquired by Cheops. 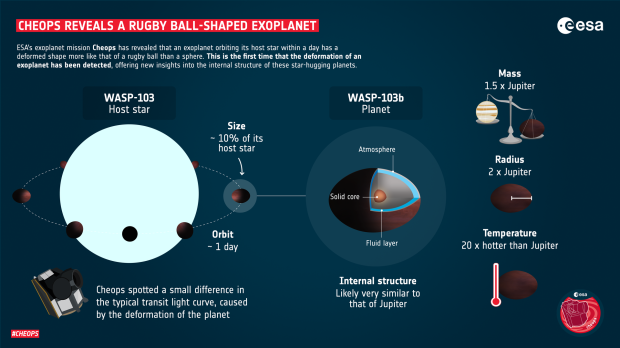 "It's incredible that Cheops was actually able to reveal this tiny deformation. This is the first time such analysis has been made, and we can hope that observing over a longer time interval will strengthen this observation and lead to better knowledge of the planet's internal structure," says Jacques Laskar of Paris Observatory, Universite Paris Sciences et Lettres, and co-author of the research.

"The resistance of a material to being deformed depends on its composition. For example, here on Earth we have tides due to the Moon and the Sun but we can only see tides in the oceans. The rocky part doesn't move that much. By measuring how much the planet is deformed we can tell how much of it is rocky, gaseous or water," explains Susana Barros of Instituto de Astrofisica e Ciencias do Espaco and University of Porto, Portugal, and lead author of the research.

"In principle we would expect a planet with 1.5 times the mass of the Jupiter to be roughly the same size, so WASP-103b must be very inflated due to heating from its star and maybe other mechanisms. If we can confirm the details of its internal structure with future observations maybe we could better understand what makes it so inflated. Knowing the size of the core of this exoplanet will also be important to better understand how it formed," adds Susana.