Dying Light 2 Stay Human's skill tree is much more condensed than the first game that cuts a lot of the extraneous fat. The first thing gamers will notice is Dying Light 2's skill system only has two trees, Combat and Agility. The original Dying Light had three trees at the start--Power, Survivor, and Agility--with two more trees added with expansions.

Apart from the overall reduction in volume, the other big change is how the tree is mostly made up of actual activated abilities. There appears to be a lot less passive perks this time around and a larger emphasis on moves that actually have a more tangible effect in the game, e.g. bashing through obstacles and wall-running.

Here's a description from Techland:

Completing quests can quickly fill both experience bars, and players shouldn't neglect the new abilities they pick up along the way, which can be used in concert for bigger experience gains. For example, with the right timing, the combat skill Grapple can throw enemies to the side using their own momentum. Follow up with Stomp for an opportunity to instantly kill enemies you've just thrown to the ground. Many such inventive combinations exist for players to incorporate in their playstyles.

Of course, these combos extend to parkour skills, as well. Dart temporarily increases your running speed, and combined with Double Jump, a Skill that helps you jump higher while vaulting obstacles, all sorts of unreachable places open up.

Here's a few confirmed skills from the video: 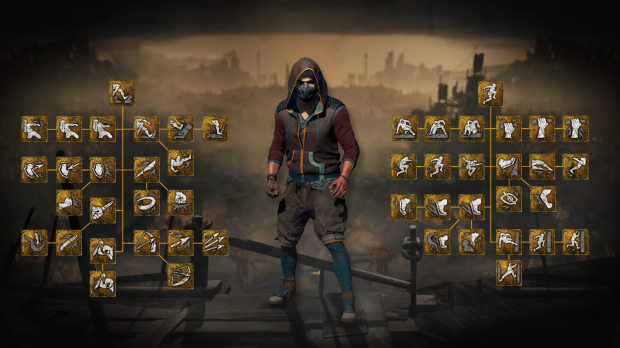