Intel has shown off a pretty useless trailer during The Game Awards, with the new 'Intel Arc Gameplay Trailer' below:

In the video, Intel shows off a few games that aren't that popular... not running at 4K or anything special (Hitman is used as the "next-gen graphics with ray tracing" title, FFS. At the end, we get a glimpse of what would be awesome to see actually happen: an Intel Arc-based desktop gaming PC, and Intel Arc-based gaming laptop.

Intel's teased Arc desktop gaming PC looks damn cool in its chassis with an overlay of your PC readouts (CPU, GPU temps, etc) on the side panel and wicked lighting inside. There's an Alienware-style 16:9 gaming monitor in, well I guess 'Arc style' as well, and to the side what looks to be a 15-inch Intel Arc-based gaming laptop. 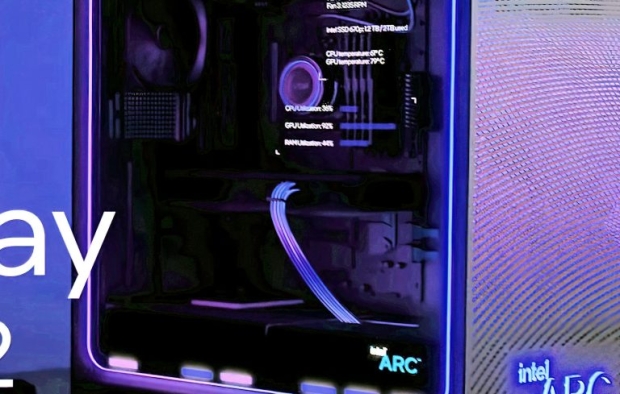 There's not much here to talk about outside of a few seconds of a render of a PC and laptop that might never hit the market, but it's nice to see Intel teasing this. I'd absolutely love to see the Arc desktop gaming PC become a thing... the laptop isn't that much of a standout, but man Intel could release a new "NUC" for the desktop PC with this design.