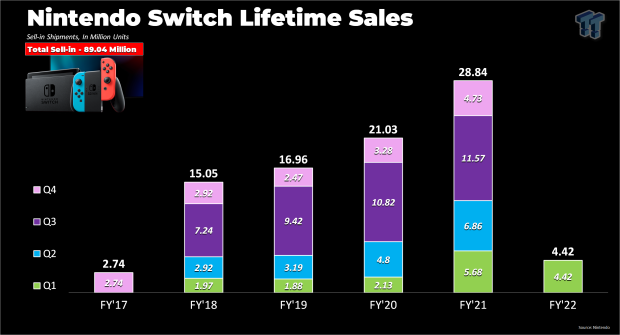 Sources close to production lines tell Nikkei Asia that only 24 million Switch consoles will be manufactured for Nintendo. The company had originally planed to produce at least 30 million units and this new revision sees a significant -20% reduction in supply. If accurate, this also means Nintendo will miss its internal Switch shipment target of 25.5 million for Fiscal Year 22.

The reduction is caused by a component shortage that's affecting production, manufacturing, and shipments of electronics ranging from video game consoles to graphics cards and phone processors. Microsoft and Sony have warned consumers that their respective consoles will also be limited through 2021 and 2022.

Nintendo is typically conservative with its numbers to keep expectations in check and to impress shareholders when sales exceed forecast thresholds. The company still doesn't expect to hit the record 28.84 million Switch units shipped in FY20 sparked from coronavirus lockdowns, however the 25.5 million figure is the second-highest forecast for Switch shipments to date.

The company recently released a new higher-priced $349 Switch OLED model to help elongate the system's lifespan and to ready consumers for a next-generation 4K-ready Switch system.