NASA's Hubble Space Telescope, along with astronomers have seen for the first time the moments just after a star ended its life in a fiery explosion.

The new study has been published in the Monthly Notices of the Royal Astronomical Society and details observations made of the star's supernova, now dubbed SN 2020fqv. Researchers are now calling the supernova observation the "Rosetta Stone of supernovas", which is a reference to the Rosetta Stone that features the same text in three different languages. The stone was used by historians to understand Egyptian hieroglyphs.

Now, astronomers, with their newly-found observations, will be able to use the data recorded by Hubble to gain a deeper understanding of the nature of supernovas and what happens within a star right before it's about to explode. Hubble's observations took place only a few hours after the explosion had occurred, which allowed for researchers to observe the material close to the star after the explosion.

This material is called "circumstellar material" and only lasts a few hours after the explosion takes place, but it contains vital information about the nature of the star and the chemical reactions that were taking place in the moments before the supernova. 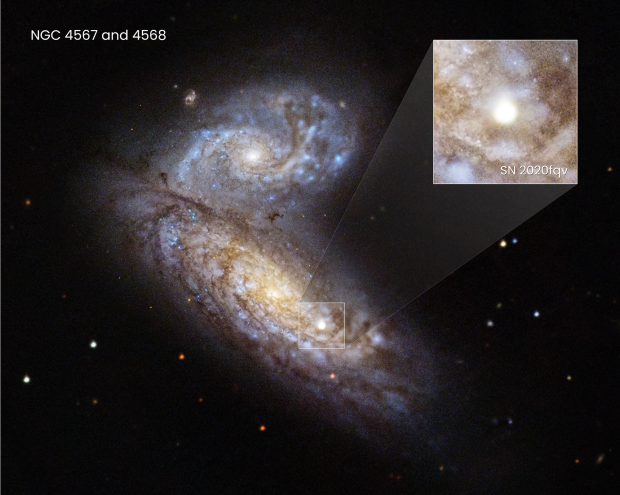 Lead author Samaporn Tinyanont, a graduate student in astronomy at California Institute of Technology, said, "We rarely get to examine this very close-in circumstellar material since it is only visible for a very short time, and we usually don't start observing a supernova until at least a few days after the explosion. For this supernova, we were able to make ultra-rapid observations with Hubble, giving unprecedented coverage of the region right next to the star that exploded."

If you are interested in reading more about this incredible discovery, check out this link here.