Astronomers used one of NASA's satellites to observe a white dwarf star seemingly switching "on and off" for the first time. 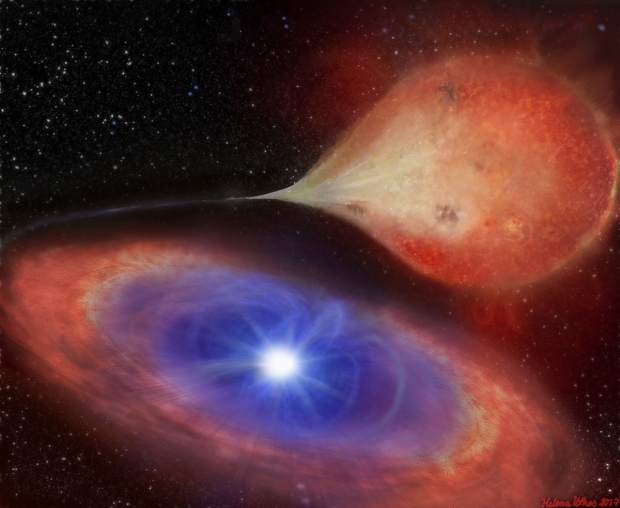 The research has been published in the journal Nature Astronomy. It details a first-time discovery of astronomers from Durham University, UK, using NASA's Transiting Exoplanet Survey Satellite (TESS) to look at a white dwarf star around 1,400 light-years. The astronomers' new observations detail the white dwarf losing brightness in just 30 minutes, which is something that was only previously observed over a period of several days to months.

So, why did this happen? According to Phys.org, the brightness of a white dwarf star is affected by the amount of material surrounding it that it can potentially feed on. When the white dwarf is bright, it's feeding off the accretion disk of its companion star, and when dull, it's not "eating" as much. From the results, the researchers suspect that there was an interference of some sort with the star's food supply which led to the dramatic rise and fall of its brightness.

Lead author Dr. Simone Scaringi, in the Center for Extragalactic Astronomy, at Durham University, UK, said, "The brightness variations seen in accreting white dwarfs are generally relatively slow, occurring on timescales of days to months. To see the brightness of TW Pictoris plummet in 30 minutes is in itself extraordinary as it has never been seen in other accreting white dwarfs and is totally unexpected from our understanding of how these systems are supposed to feed through the accretion disk. It appears to be switching on and off."

"This really is a previously unrecognized phenomenon and because we can draw comparisons with similar behavior in the much smaller neutron stars it could be an important step in helping us to better understand the process of how other accreting objects feed on the material that surrounds them and the important role of magnetic fields in this process."

Additionally, the researchers suspect that what they were witnessing may be a reconfiguration of the white dwarf's surface magnetic field. However, more research is needed to confirm this theory. For more information on this story, check out this link here.