NASA researchers have detected the presence of persistent water vapor on one of Jupiter's icy moons using the Hubble Space Telescope.

Jupiter has many moons, and NASA is planning on exploring them as they could hold secrets about the evolution of Jupiter and Jupiter-like exoplanets that may be found in other parts of the Milky Way. According to a new post by NASA, Hubble's observations from 1999 to 2015 have led researchers to believe that one of Jupiter's moons, Europa, is showing signs of water vapor being present in the moon's atmosphere, which is only one-billionth the surface pressure of Earth's atmosphere.

Europa is scared by cracks and fissures and averages -275 degrees Fahrenheit, but researchers believe that life could be present in a vast ocean beneath its icy crust. Hubble previously observed 60 mile-high plumes of water vapor being shot into the atmosphere, which is very similar to a geyser on Earth. These results suggest a "long-term presence of a water vapor atmosphere only in Europa's trailing hemisphere," writes NASA. The results from these observations will assist NASA in its upcoming mission to Europa called the Europa Clipper mission.

To learn more about Europa and how this discovery was made, check out this link here. 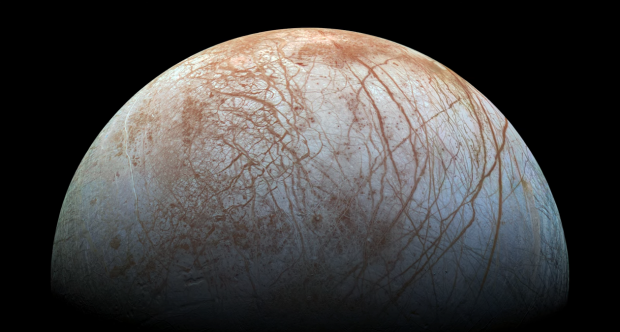