This week officials warned that Earth was going to get with large solar flare from the Sun, which could potentially affect satellites, internet connections, and more.

Officials at the US National Oceanic and Atmospheric Administration (NOAA) warned that a coronal magnetic ejection (CME) was on a direct collision course with Earth and was expected to arrive on October 12. NOAA warned that the effects of the CME would cause minor geomagnetic storms in Earth's atmosphere, which could result in auroras being seen in locations such as north of England and Northern Island.

The CME has impacted Earth, and officials are happy to report that everything went as anticipated. Solar wind speed increased by nearly 62 miles a second, and total interplanetary magnetic field (IMF) strength quickly elevated to over 15 nT. Additionally, NOAA states on its website that the CME arrival caused a G1-G2 geomagnetic storm which is categorized as "minor - moderate". The geomagnetic storm caused gorgeous auroras to be spotted in the sky. Those can be seen in the above video. 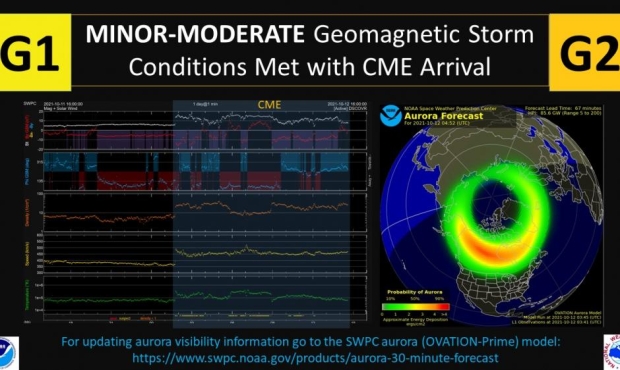