Yesterday, officials warned that a blast from the Sun was heading directly to Earth, and now officials have updated the time of impact.

Originally, officials from the US National Oceanic and Atmospheric Administration (NOAA) said that an M-class solar flare (second largest classification) caused a coronal magnetic ejection (CME) of charged particles to erupt from the surface of the Sun. The solar wind (charged particles) was found to be directly on course with Earth, and officials estimated that it would impact Earth on October 10.

However, a new update from NOAA states that the CME will arrive around 12 pm on October 11 with "lingering effects persisting into October 12." So, what does this mean for humans? Dr Sangeetha Abdu Jyothi, from the University of California, Irvine and VMware Research, explained, "A Coronal Mass Ejection (CME) involves the emission of electrically charged matter and accompanying magnetic field into space. When it hits the Earth, it interacts with the Earth's magnetic field and produces Geomagnetically Induced Currents (GIC) on the crust."

This interaction between the charged particles emitted from the Sun and Earth's magnetic field can cause disruptions in services such as satellites as well as auroras to be seen in the sky. Officials say that auroras could possibly be spotted north of England and Northern Ireland.

Additionally, internet services may be affected by the impact, as explained by Dr. Abdu Jyothi, who said, "In today's long-haul Internet cables, the optical fiber is immune to GIC. But these cables also have electrically powered repeaters at ~100 km intervals that are susceptible to damages."

The Sun is entering its most active period, and with an increase in activity, we can expect more of these solar flares to occur. If you want to learn more about the Sun and its cycles, check out the links below.

Read more: Sun may cause Earth severe problems in the next 4 years as it wakes up 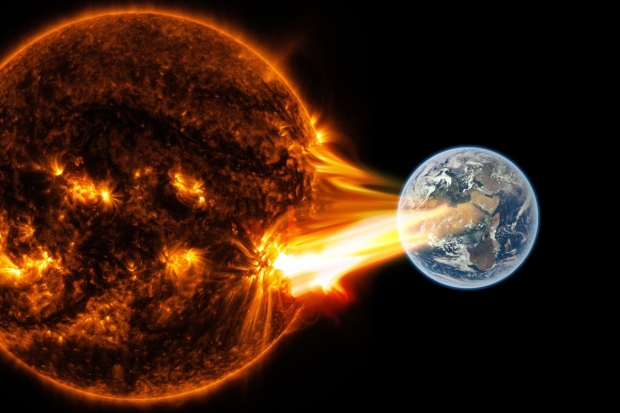