The Kickstarter campaign for the Lynx R1 AR/VR headset went live on Tuesday, and it's off to a great start. The company nearly met its goals in less than 12 hours.

The Kickstarter campaign for the Lynx R1 AR/VR headset is almost fully funded and it has been less than 12 hours.

The Lynx R1 is a new standalone headset from a France startup that offers virtual and augmented reality technology. The R1 is powered by a Snapdragon XR2 SoC, which puts its potential performance on par with the Oculus Quest 2, Pico Neo 3, and Vive Focus 3 headsets. The headset includes 6GB of memory, 128GB of storage, and a microSD card slot for expansion.

Lynx has been working on the R1 for quite some time. The company was supposed to have delivered the headsets to its earliest backers by the end of last year, but it delayed production because of poor hand tracking. Now Lynx is back with a redesigned headset, looking for new backers to help fund the final stages of development.

For backing the Kickstarter campaign, Lynx is offering a discount on the headset. Backers can get in for as little as 499 euros. Kickstarter backers can also opt for a limited-edition clear version, which lets you see all the electronics inside it for 699 euros. For your money, you'll get one of the first Lynx R1 headsets to ship to customers. The device features dual 1600 x 1600 pixel displays that operate at 90hz. Lynx said the device offers a 90-degree field of view, smaller than most VR headsets but broader than most AR devices. 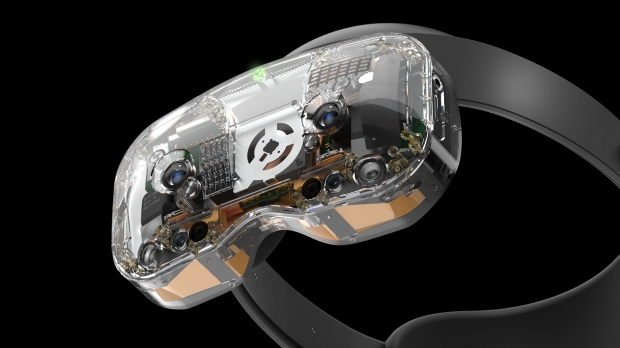 The R1 features two black and white cameras which handle positional tracking; two IR cameras that enable hand tracking; and two RGB cameras that offer passthrough video for AR experiences. The headset also includes embedded speakers, as well as a 3.5mm jack for your own headphones. The Lynx R1 also features the most interesting lenses that we've ever seen.

Lynx launched the campaign hoping to get at least $350,000 and it looks like they will bring in far more than that after the campaign drew more than $300,000 in less than 10-hours. If you're interested in picking up a Lynx R1 headset, the Kickstarter campaign will run until November 9, 2021. Lynx expects to begin shipping headsets to backers in April 2022.