UPDATE:New findings confirm the new PS5 model's APU runs cooler than the launch model, and the extra heat output is due to more heat being processed by the smaller heat sink.

Sony's new PlayStation 5 model doesn't just have a better screw to adjust the base--it actually has a different heat sink too. 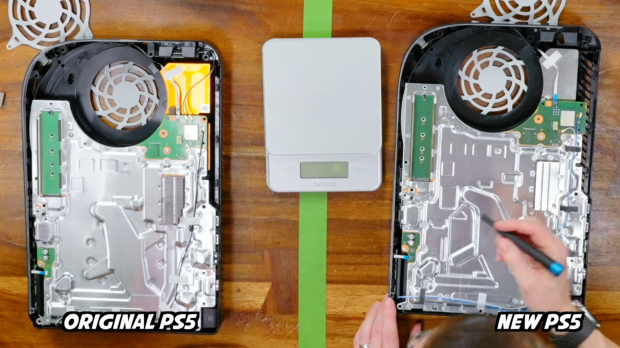 The new CFI-1100B model PS5 is lighter and cheaper to make than the original model, but according to tech YouTuber Austin Evans, the new PS5 actually runs hotter than the launch edition.

How much hotter? About 3-5 degrees Celsius. It's not a lot, but it's definitely a difference. The PS5 uses one of the most advanced cooling solutions for a console, including a massive 120mm dual-sided intake fan, liquid metal thermal compound, and a robust heat sink. At least the base PS5s have robust heat sinks; Sony has skimped out a bit with the new models. 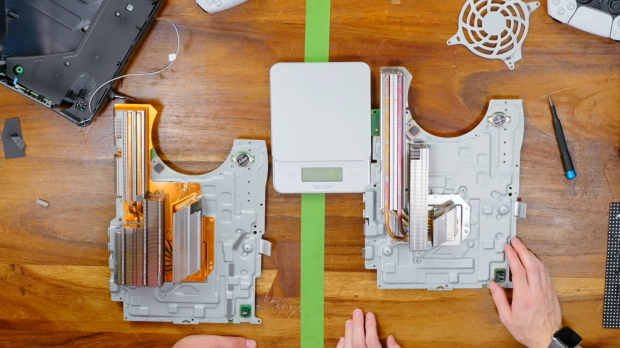 A recent teardown shows the two systems have a noticeably different heat sinks. The new model is much smaller, features less copper hardplate surface area, and a significant reduction in aluminum fins for heat dissipation. This accounts for the temperature discrepency.

Before the PS5 launched, Sony engineer Masayasu Ito said the heat sink's heat pipes simulated the Xbox One X's breakthrough feature: "Like the PS3 and PS4, it uses a heat pipe. However, the shape and airflow have made it possible to achieve the same performance as a vapor chamber."

The rationale behind this move is simple. Sony wants to save money and maximize profits on each console sold. The company recently confirmed that every PS5 is now sold at a profit and it expects to make the biggest shipment of any console-maker ever sometime next year.

This adjustment is how they'll achieve both.

"We're planning next year's PS5 availability to ensure FY2022 will represent the highest number of consoles that we've ever sold in PlayStation history," SIE President Jim Ryan told investors back in May.