Halo Infinite will only have singleplayer campaign when it launches this Holiday season. 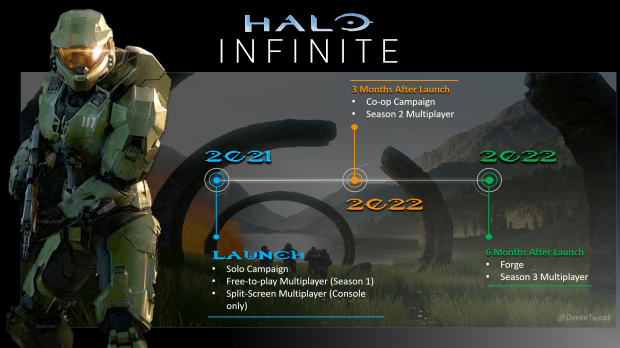 Halo Infinite won't have campaign co-op play at launch, becoming the first Halo game in the entire franchise to break this long-running tradition. Campaign co-operative play is being delayed a minimum of 3 months after launch and will instead release sometime in 2022, during Infinite's second season.

The reason? Co-op simply isn't ready yet due to the complexities of Halo Infinite's nonlinear Far Cry-esque campaign structure. The game is actually more reminiscent of an RPG now, complete with lots of replayability and gun/character upgrades.

"Campaign co-op is fundamental to the Halo experience. Unfortunately, as we focus the team for shutdown and really focused on a really quality experience for launch, we made the really tough decision to delay shipping campaign co-op for launch. And we also made the tough call to delay shipping forge past launch as well," 343i head of creative and original Halo vet Joseph Staten said.

343i plans to release campaign co-op in season 2, which will be 3 months after the game's launch. Forge will launch in season 3, which will be at least 6 months away from the original release.

These are targets and not set-in-stone dates. This means co-op could be farther out than 3 months.

"All these things are subject to change as we dial things in but that's our goal right now," Staten said.

Staten says that both singleplayer campaign and the F2P multiplayer--which is the real reason Halo Infinite exists at all--are both in good shape for launch. The free-to-play multiplayer is the main driver of the game's engagement monetization engine that will continue earning money over time.

"We are 100% committed to releasing campaign in Holiday 2021, and the first season of our free-to-play multiplayer."

Staten goes on to briefly highlight that forge and co-op simply didn't meet the studio's standards yet.

"Our number one priority is making sure whatever we ship, whenever we ship it, it meets the right quality bar across all platforms--Xbox devices, PC and all of its different configurations. And when we looked at these two experiences, campaign co-op and forge, we made the determination...they're just not ready. As a studio we don't want to ship things if they're not ready."