NASA launched its Juno mission ten years ago, and since then, the space agency has been monitoring Jupiter and everything around it via its Juno space probe. 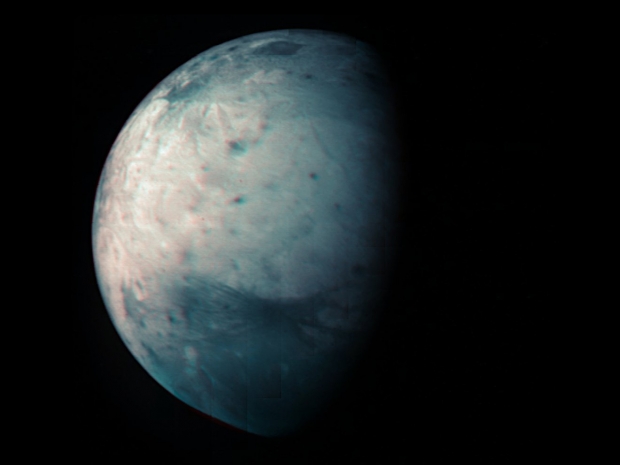 Juno has been relaying valuable data back to researchers for quite some time now, and during its last orbit around Jupiter, the space probe was able to capture a stunning infrared image of Ganymede, the largest moon in our solar system. The last flyby occurred on July 20 when Juno used its Jovian Infrared Auroral Mapper (JIRAM) instrument to measure the levels of infrared light, which was then relayed back to researchers who created a new map of infrared map of Ganymede.

Juno Principal Investigator Scott Bolton, a researcher at the Southwest Research Institute in San Antonio, said on NASA's post, "Ganymede is larger than the planet Mercury, but just about everything we explore on this mission to Jupiter is on a monumental scale. The infrared and other data collected by Juno during the flyby contain fundamental clues for understanding the evolution of Jupiter's 79 moons from the time of their formation to today."

Alessandro Mura, a Juno co-investigator from the National Institute for Astrophysics in Rome, said, "We found Ganymede's high latitudes dominated by water ice, with fine grain size, which is the result of the intense bombardment of charged particles. Conversely, low latitudes are shielded by the moon's magnetic field and contain more of its original chemical composition, most notably of non-water-ice constituents such as salts and organics. It is extremely important to characterize the unique properties of these icy regions to better understand the space-weathering processes that the surface undergoes."