Xiaomi is about to unveil its first next-gen OLED gaming TV in just a few hours' time, with the company confirming its new August 10 event. 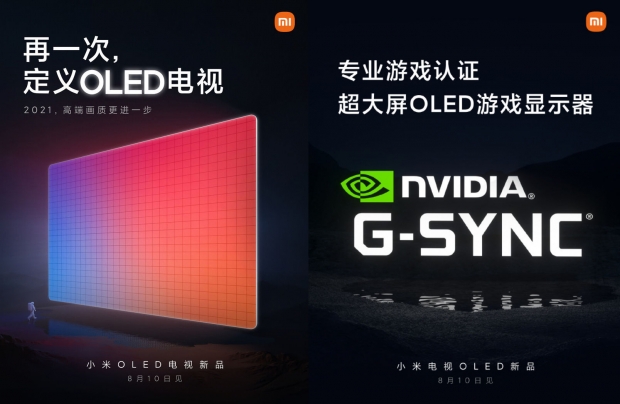 During the event on August 10, Chinese giant Xiaomi will unveil their new Mi OLED gaming TVs that will include NVIDIA G-SYNC modules. The news was confirmed on Chinese social media platform Weibo, but we don't know how big the TVs will be, which resolution, refresh rate, or anything else.

I would be very disappointed if we had anything less than 4K 120Hz given it's an OLED gaming monitor, and HDMI 2.1 is a given if it's an OLED TV. This means we'll get the usual HDMI 2.1 technologies, but it would be nice to have some lower-res OLED gaming TVs.

Xiaomi isn't going to win over LG and its legendary CX and C1 OLED gaming TVs which are available in various sizes including 48/55/65/77-inch 4K 120Hz OLED goodness. Xiaomi could change things up with a large 1440p 120Hz+ OLED gaming TV, but I don't see that happening. Expect 4K 120Hz + HDMI 2.1 and hopefully prices that are cheaper than LG (which are not that expensive, considering how good they are).