Grand Theft Auto V is a sales juggernaut that has not only amassed 150 million shipments to date, accounting for 1/3rd of total GTA franchise sales, but the game has helped generate over $6.4 billion since its release. 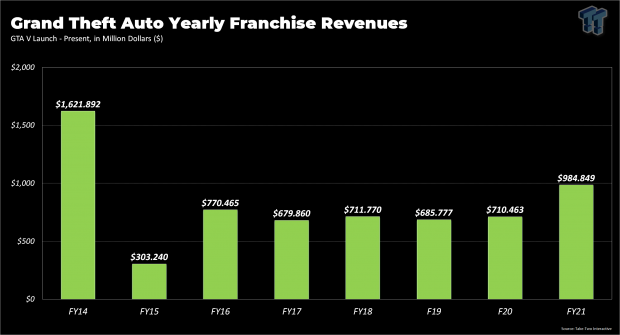 In preparation for Take-Two's Q1'22 earnings call tomorrow, I decided to chart GTA franchise revenues on a quarter-by-quarter and year-by-year basis. The results were just as eye-opening as the huge GTA V game sales graphs I put together.

According to numbers provided by Take-Two Interactive, the Grand Theft Auto franchise has made $6.468 billion in revenues as of Fiscal Year 2021 (bear in mind this is total GTA revenues, not just GTA V, but most of if is from GTA V). 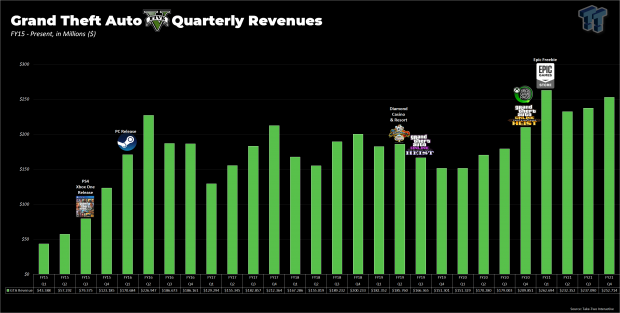 This eight-year span encompasses a number of milestones, including the game's initial launch on Xbox 360 and PlayStation 3, which skyrocketed GTA earnings past $1.6 billion, as well as subsequent re-releases on PS4, Xbox One, and PC. These new launches also helped spark revenue and game sales growth. In November of this year, Rockstar will do it again by re-releasing GTA V on PlayStation 5 and Xbox Series X. 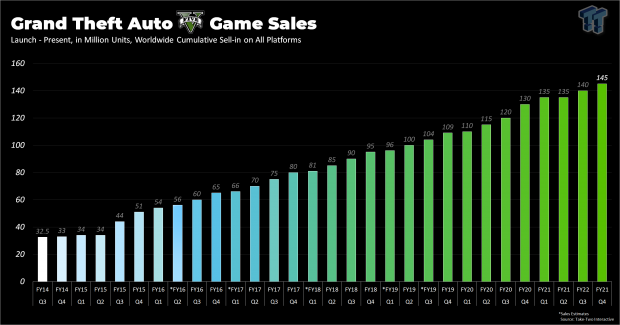 Taking a closer look at the numbers shows the game owes a sizable part of its goldmine to Grand Theft Auto Online. We don't know the exact digital mix (yet) but Take-Two has routinely accounted GTA Online as one of its top-earners in microtransaction revenues.

GTA Online has helped the game grow its revenue base years after launch, and other promotions like the Epic Games Store freebie--which coincided with the single-largest quarterly revenue spike since the game's launch in 2013--and the inclusion on Game Pass are also major drivers to sales and earnings.

We've also compiled a closer look at Red Dead Redemption 2's sales growth since launch, which you can find here.