Fallout 76's new legendary crafting system is now live, but it hasn't changed all that much from the unpopular PTS build.

Fallout 76 players can now craft the perfect legendary item, but the odds of that happening are extremely small. The new legendary crafting system lets players re-roll powerful weapons and armor for the chance of unlocking the best of the best gear. There's just one issue: The odds are very much against you.

Gamers have a few issues with the system. It requires a hefty investment in materials gathering with no guaranteed payoff. The argument is that it shouldn't be easy to get perfect gear, but players still want more control in the items they do get.

The real core issue is that there's very little chance the payoff will be worth the grind. Players have to grind two currencies to craft legendary items; legendary cores and legendary modules. Cores are earned from game events and modules can be bought with scrip, a third currency you get from breaking down legendary items you don't want.

This gameplay loop fuels the mid- to end-game as players chase good gear.

The costs are somewhat high:

Legendary modules cost 50 scrip a piece, and gamers can now earn 300 scrip a day, so users can theoretically earn up to 6 modules a day. That's enough for a single 3-star re-roll per day.

Even after players grind cores and modules, there's no guarantee they'll get anything good--or anything better than they already have. Legendary crafting is equivalent to spinning a slot machine. It's all randomized and you never know what you'll get.

Even if you get a good 3-star mod, you can't re-roll 2-star or 1-star mods. You can only re-roll the entire item. 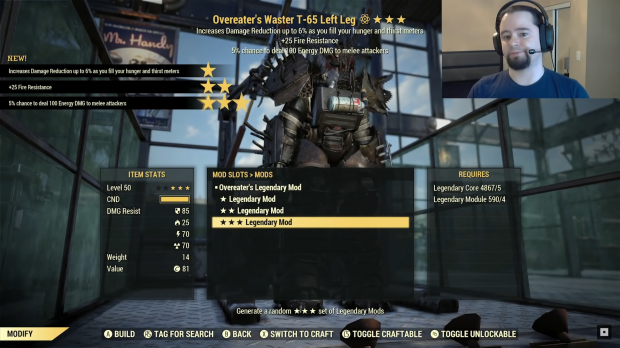 So it's possible to get the perfect high-tier mod but junk mods in the other slots. It's extremely variable. One Fallout 76 user put together an algorithm that shows just how astronomical the odds are of getting perfect gear.

Bethesda has actually increased the RNG by adding new legendary effects, and has sweetened the pot by significantly buffing armor/weapon effects.

One thing that has changed is resource caps. Bethesda now allows players to hold 40,000 caps, up to 10,000 gold bullion, and store up to 5,000 scrip while earning up to 300 scrip per day. This boost is incredibly important to incentivize the new legendary system grind.

Here's some examples of the new legendary effects: