All NewsBusiness, Financial & LegalCases, Cooling & PSUContests & GiveawaysCPU, APU & ChipsetsDealsDisplays & ProjectorsGamingMotherboardsScience, Space & RoboticsStorageVideo CardsVirtual & Augmented Reality
All ReviewsAll ArticlesAudio, Sound & SpeakersCases, Cooling & PSUCPUs, Chipsets & SoCsComputer SystemsDisplays & ProjectorsGamingMotherboardsNetworkingPeripheralsStorageVideo Cards
GuidesGamingAsk the ExpertsNewsletterAboutForums
Chia Coin MiningRTX 3090RTX 3080RTX 3070HDMI 2.1Bitcoin MiningBattlefield 6
Sony is about to launch a new Cyber-shot T-series camera, the DSC-T200 and it looks like it's going to be a real stunner. Not only does it feature a massive touch sensitive 3.5-inch widescreen display, but it also has 5x optical zoom in a body that measures just 93.5mm x 59.3mm x 20.4mm (WxHxD) and it weighs in at 186g with the battery fitted.

It features a fairly bog standard 8 Megapixel sensor by today's standards, but this is more than enough for most users. It has 31MB of built in memory which according to Sony is good for 10 shots at full resolution. It will take a variety of Memory Stick Duo cards to expand this. 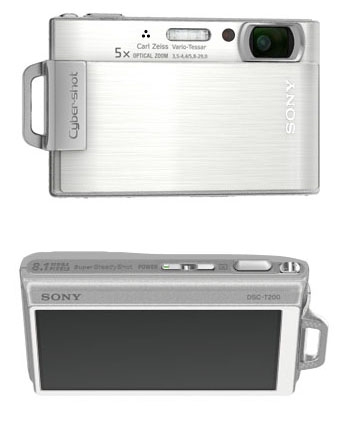 Still, this has to be one of the best looking compact digital cameras out there, although it looks like it might be a bit fiddly to use for those with large digits as there are only four buttons on the top of the camera and one of these is the zoom. We'd also expect it to be silly expensive of course, as it is a Sony.

No expected retail price or release date is available, but you can find out some more information and additional images here
Newsletter Subscription